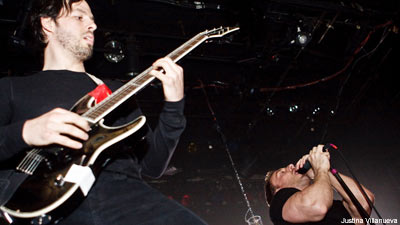 "I hear you Ben!" a fan screamed from the crowd. Guitarists Ben Weinman and Jeff Tuttle, frontman Greg Puciato, bassist Liam Wilson and new drummer Billy Rymer were yet to be seen. The stage crew had just narrowed down the possibilities of anything going wrong during the band's set. So the stage was dark and empty. Yet while the members of Dillinger Escape Plan were still New York City's tiny Irving Plaza dressing room, fans were aware and ready for their presence.

The New Jersey-founded band kicked off their tour on March 11 with Animals as Leaders, Iwrestledabearonce and Darkest Hour. Even though I took notes for those other bands, and even though there were a lot of people having fun during those sets, there is no way I can write about them. Not after what I witnessed after 10 PM.

In case you've never been to a Dillinger show before, any chance these maniacs get to do something dangerous -- to jump onto something that is not meant to be stood on or to swing from something that is not meant to be swung from -- they do it anyway! For instance, Weinman redefines gravity with every leap he makes. If there was a metal Olympics, he'd win many gold medals with his ankle shocks of steel. Did you know that he broke his leg about a year ago? I don't think he remembers.

"How many of you have been with us for a long time. Like 'Calculating Infinity' long?" Puciato asked the crowd. The statement was a teaser for the band to play 'Sugar Coated Sour.' They didn't play any more 'Calculating'-era songs until they closed their set with 'The Running Board' and '43% Burnt.'

They also played newer songs like 'Farewell, Mona Lisa' and 'Black Bubblegum,' in addition to older songs like 'When Good Dogs Go Bad' from 'Irony Is a Dead Scene' and 'Panasonic Youth' from 'Miss Machine.'

'Option Paralysis' drops March 23 via Season of Mist/Party Smasher Inc. But, you can pre-order the sucker now. Or you can just buy it directly from the band if you're lucky enough to live near the 25 cities they'll be playing before embarking on Warped Tour in June.