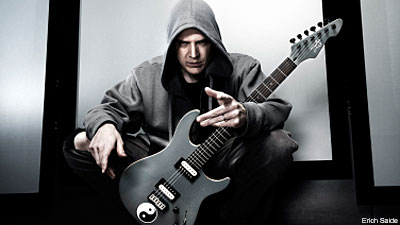 The thing is, it nearly happened. Strapping Young Lad mastermind Devin Townsend and Opeth's Mikael Åkerfeldt almost collaborated on Townsend's 'Addicted,' the second of four records the Canadian metal maven's been working on in recent years as the Devin Townsend Project. It would have been the collabo to end them all ... but don't worry, says Hevy Devy.

"It didn't happen because it's not meant to happen yet," Townsend tells Noisecreep. "Him and I have been jousting back and forth to get something together for a long time, but I mean, again ... it's like I wanted him to do something on 2006's 'Synchestra,' but it didn't come together."

Noisecreep recently spoke with Townsend at length about 'Addicted,' which is, at its heart, a heavy metal pop record, featuring dual vocals from Townsend and ex-Gathering frontwoman Anneke van Giersbergen; the record is due in stores Nov. 17. But it almost also featured Åkerfeldt's pipes, which would have made it a collaboration of the titans.

"For [the third DTP album] 'Deconstruction,' my thought at this point is to have a bunch of heavy metal singers on it, but I may end up doing a choir. The thing for me is, I sing because it's the easiest way for me to facilitate my ideas, and I think I got a good voice, and I do what I do well. But I love singers, dude, and I love playing guitar, because singing is a drag."

So for 'Deconstruction,' an album Townsend says he's about halfway through the recording of, who would he like to growl on the record beyond Åkerfeldt?

"Randy Blythe from Lamb of God has a great way of snarling his words out," Devin says. "I love singers. Tim 'Ripper' Owens ... that dude is ridiculous. One of the best metal singers I've ever heard. That dude from Talisman ... Jeff Scott Soto. That guy is crazy good. Ultimately, I'd love to have singers that's are amazing so I can just sort of riff out. It would be killer."

Download Devin Townsend Project Songs
Filed Under: devin townsend, devin townsend project, DevinTownsend, DevinTownsendProject, Lamb of God, LambOfGod, Opeth, Strapping Young Lad, StrappingYoungLad, talisman, the gathering, TheGathering, tim ripper owens, TimRipperOwens
Categories: Interviews
Comments
Leave A Comment
The 50 Best Rock + Metal Songs of 2022
The 50 Best Rock + Metal Albums of 2022
26 Bands Who Sound Nothing Like Their First Album
The Highest Charting Rock + Metal Albums of 2022
The 10 Best Album Sequels in Rock + Metal
Artists Answer – What Song Are You the Most Proud of?
Where Did the Wall of Death Come From?
Bands Who Changed Their Names After Releasing at Least One Album
Lamb of God to Lead Inaugural ‘Headbangers Boat’ Metal Cruise in 2023