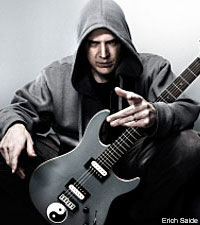 Fans of Canadian heavy metal outfit Strapping Young Lad may never be able to appreciate why Devin Townsend decided to dismantle the group back in 2007, because, well, they're just being selfish. In their minds, Strapping wasn't done yet. Problem is, Devin was done with Strapping. As he puts it, "I just wasn't there anymore."

On Nov. 17, Townsend will release 'Addicted,' the second of four albums he's releasing with the Devin Townsend Project. It's a far cry from Strapping Young Lad ... a heavy metal pop album that's as catchy as barbed wire and features vocals from Townsend and ex-the Gathering vocalist Anneke van Giersbergen. It's the kind of record Devin feels comfortable making at this stage in his career, and basically, his departure from Strapping boiled down to a feeling. It didn't feel right for him to keep making that music,

"If you are doing things passed the point you should be doing them, it's ... Strapping, for example. A lot of people are like, 'Oh Dev, you're anti-Strapping ... you left the band,' and its like, dude, I'm not anti-Strapping. I love that band, I thought we were f---ing awesome," Townsend tells Noisecreep. "But you get to that point where its just not what you're feeling anymore."

Townsend says he literally "couldn't" be in Strapping anymore, and "towards the end, when I was continuing to do it passed my prime, it was like this weird struggle," he says. "It's not that anything was bad. People change, and I think there's a lot of bands that continue to play a role, and at that point, how much of it is actually a parody, and if the music is based on being an honest reflection of a frame of mind, and that's what people relate to, eventually, they're going to see you're just putting in the hours. And really your not doing yourself or anybody any favors. Luckily, with Strapping, we fought that thing right to the end. We finished our contract, and I love those guys and I'm proud of everything we did. But as much as the Devin Townsend Project is a four-record project, the Strapping Young Lad project, in a way, was a five-record thing. After this, who knows?"

When asked if the band's stint in Ozzfest in 2006 was torturous, given it came so close to the band's end, Townsend laughs. "Oh my god, dude ... it was brutal. Brutal." Townsend says that when the band -- rounded out by guitarist Jed Simon, bassist Byron Stroud and kitman Gene Hoglan -- first arrived at Ozzfest, "the powers that be were like, 'You're too old, you're lucky to be here ... shut up and know you're place,' and we're playing at 9:30 in the morning ... brutal."

There was one point, early on, when the band was walking to the catering area to get food, and Simon walked down the wrong ramp, sending an Ozzfest stage manager on a tear. "He went f---ing ballistic on Jed, so Jed was like, 'F--- you.' The guy went nuts, and pulled this rank thing on us, like we were a bunch of upstarts and we spent the next three weeks at war with Ozzfest. They wanted to kick us off, we wanted to leave ... the guy who put the lineup together didn't want us to leave.

"Finally, I went up to the Ozzfest guys and said, 'We're old, for sure, but you gotta know we've been doing this for 15 years, and we have no delusions fo becoming the next big thing. We do this because this is what we do, and the label paid $80,000 for us to be on this tour. So either we'll spend the rest of the tour hating each other or we'll pull it together.' And they were like, 'We're old, too ... let's just get along,' so I just went up on stage every day after that and gave the show s---."

And then it happened. A fitting end to Strapping's tenure. "On one of first tours, no one liked us, and everyone was sitting there with their arms crossed, and we attacked everybody," he says. "'We don't want to play for you either.' That sort of became our shtick. 'If you don't like us, f--- you.' That is what we became known for. Then, we're at Ozzfest, and we're like, 'F--- you.' And the audience is like, 'Yeah...f--- you!' No. No, no. We're supposed to be a big middle finger, not some caricature of a middle finger."