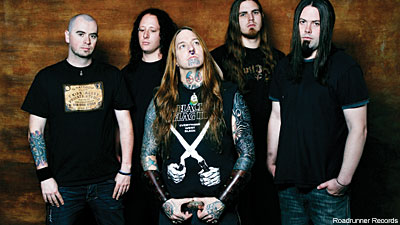 Devildriver guitarist Jeffrey Kendrick has been given the honor of being nominated in the Best Shredder category for the eighth annual Metal Hammer Golden God awards. The axeman is in running against Zoltán Báthory (Five Finger Death Punch), Russ 'Satchel' Parrish (Steel Panther), Dino Cazares (Fear Factory) and Pepper Keenan (Corrosion of Conformity/Down). Who wins is of course left up to the fans.

As for the never ceasing never slowing down Devildriver they are currently not on the way to a show or hitting the stage, so that means the long standing band is gearing up for another record. Expected to be out later this year, the band is in the final stages of demoing, which vocalist Dez Fafara has been updating his Twitter regularly about.

It was only last year that Devildriver released 'Pray for Villains,' but as Fafara revealed in an interview, this is all a part of the master metal plan. "We want to keep Devildriver fans on their feet. So every two years we're going to release a record and just continue to tour like we do, and we're booked until May 2012. Then we're going to take about six months off. That'll be the most time I've had off in about fourteen years."

The band is slated to hit Sonic Ranch Recording Studio, where 'The Last Kind Words' was laid down, on April 13.