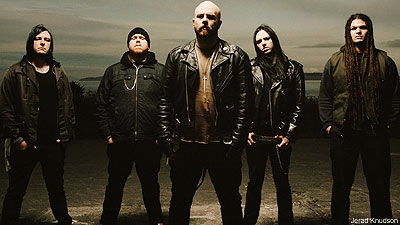 Ryan Clark, vocalist extraordinaire of Demon Hunter, whose fifth opus, 'The WorldIs a Thorn,' is due out via Solid State on March 9, has also served as the art director at Solid State/Tooth and Nail for the past 10 years. Solid State has released all of Demon Hunter's records. While on paper, working for the label you are signed to might seem dubious or a conflict of interest, but it works just fine in practice. "It makes it easier," Clark told Noisecreep. "I am friends with everyone and know what they're doing. I connect with them on a peer level, and I understand how they work and can throw ideas in the pot of marketing and promotion."

Clark has designed the artwork and album packages for bands such as the Chariot and August Burns Red. Some bands give him carte blanch to do whatever he wants, while other bands are more involved in the process. "Those almost always come out better," Clark said about the covers where he is given free reign. "Some bands know exactly what they want and use [me] as a pair of hands, and that's fine, too."

His work at Solid State is his 9-to-5, but Clark also works in the same office, which is upstairs from the Solid State/Tooth and Nail compound, with his brother (and ex-Demon Hunter guitarist) Don, where they share Invisible Creature, their design firm independent of Solid State/Tooth and Nail. The Brothers Clark are such talented designers that each has received separate Grammy nominations in packaging.

Norma Jean's 'O God, the Aftermath' is the record for which Ryan Clark garnered his first Academy nod and he also freelances, having just wrapped up the artwork on the forthcoming Bleeding Through record. "Both Oh, Sleeper records are something I am proud of," Clark said. "It's one of those situations where they trust me as a designer to do something cool. I did a package for a band called Trenches, which was an optical illusion. I finished up the new Wolfmother earlier this year, too."

While Clark mostly traffics in the rock world, he has done hip-hop and country records here and there. And in case you were wondering, his second Grammy nomination came for his work on the artwork for Tooth and Nail indie rock band Fair. He's also not perplexed that his design work has attracted a Grammy nod, as opposed to his own musical output. Clark said, "It doesn't feel weird. I'm realistic. Music categories have bands that are more popular and of a broader spectrum. The art categories don't work like that. A band that sells a couple thousand records can be nominated, which is amazing."