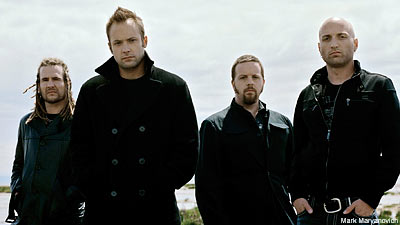 Smith first gave the game a shot when Default first started touring, back on the debut album, 'The Fallout,' in 2001. "I wasn't really into it before, but it was a good thing for me and my dad to do when I'd be home for like four days before heading out again," says Smith. "Then I started bringing my clubs down South during the winter. I went on tour, and when I'd be bored on the bus, I'd go play golf. I started getting seriously into it."

Since then, he's golfed in South Carolina, Georgia, California, New Mexico and Texas. "Nice courses, but nothing really famous. But I had a chance to golf Torrey Pines in San Diego, which is a famous PGA course," says Smith of the cliff-top course overlooking the Pacific Ocean. "I normally wear one of the shirts I got from there. I'm pretty proud to wear that one."

Now, Smith can boast of being better than his dad. "He beats me once in a while, but I pretty consistently beat him by one or two strokes."

Smith hasn't had a chance to play with any of the above-mentioned rockers. However, he says Alice Cooper "would be a dream come true," and "Darius Rucker is apparently amazing, too."

"There are a lot of guys in bands that are starting to do it, especially in Vancouver. I golfed with Chris Crippin from Hedley a little while ago and he got a hole-in-one a couple of weeks prior to golfing with me and he was just rubbing it in," recounts Smith.

"We were playing a Swan-e-set set in Port Coquitlam in the Lower Mainland and we were tied at the 18th hole and we both had a pro shot and he shanked his in the water. I've never heard somebody yell 'f---' so loud in my life. And I beat him. It was awesome."