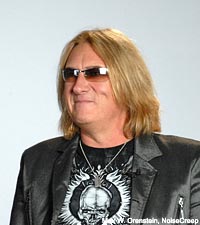 Def Leppard frontman Joe Elliott stopped by the Noisecreep offices in New York to hang out and talk about rock and roll. More specifically, the gentle giant (trust us...he's as tall as the day is long) sat down in our studios to discuss the band's summer tour with Poison and Cheap Trick and their recent appearance with Taylor Swift during the CMT Awards, during which they collaborated for "Pour Some Sugar on Me."

"The CMT Awards were absolutely a blast to play," Elliott enthused. "We played with Taylor last year when we shot the 'Crossroads' show, and a couple of the performances got nominated for awards so they asked us to come and perform with her, and it was gonna be the finale, and it was the most watched portion of the show, which is kind of gratifying." 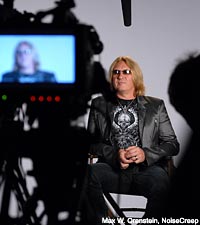 Elliott says he loved working with the country cutie, who has been a Def Lep fan "since before she was born. Seriously, her parents are like huge fans, especially her mom... and they kind of brought her up on us, so it made it a lot easier to work with her."

According to Elliott, working with Swift wasn't that much of a stretch. After all, he doesn't see too many differences between what most country artists are doing nowadays, and what Def Leppard's been doing since its humble beginnings.

"A lot of her songwriting's very similar to what we were doing on like, the 'Hysteria' and 'Adrenalize' albums, so it was easy to do," Elliott says. "But the performance was just a blast. We had the one song to do, we watched the awards sitting up in the seats, came down and got ready, did 'Sugar,' and left. But we were invited in by Nashville for a little while there and it was a pleasant experience, it was a lot of fun."

Def Leppard's performance with Swift on CMT's "Crossroads" program is now available on DVD. That episode came together in a strange way. Def Lep heard an interview with Taylor, during which she expressed interest in doing the show, but only if Elliott and crew were down. "So, we said, let's get in touch and see if she means it. And she did! So we did. It just all fell into place, it was fantastic. She got to sing some of our stuff, I got to sing some of hers. And, it just took us out of our normal day to day routine, and that was the appeal as much as anything, was the fact that, we were flattered that somebody that was so popular wanted to work with us, but it was the fact that it was also different as well... it just made, it just added extra spark to what we normally do."