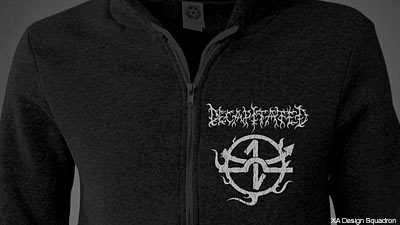 It's been over two years since the tragic tour-bus accident that lead to the death of Decapitated drummer Vitek, and the hospitalization of vocalist Covan. The band eventually pressed on with guitarist Vogg and new members, and they've since established U.K. tour dates in February with Kataklysm. Along with all that come new merch and new artwork.

Designer Xaay -- whose Web design firm, XA Design Squadron, has done work for bands such as Behemoth and Nile -- created new designs for the band. He had worked with them last year, creating a new hoodie design and a flyer for a benefit show for the incapacitated Covan. But now that the Polish metal band has reformed, new branding and new designs were in order.

"We started the printing phase of the first draft of new merch designs prepared for the upcoming year," Xaay told Noisecreep. "We have [a new] symbol and a title for the band's resurrection period. So far we have seven new designs for T-shirts, longsleeves, hoodies and girlie T-shirts. We did also some new prints for the stage."

But the Squadron's work isn't limited to just graphic design. "In the nearest schedule we have also a photo session and completely new MySpace design," Xaay said.

The band has also scheduled tour dates for April in Australia with Psycroptic and Origin.