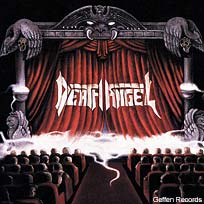 The Bay Area thrash scene of the late '80s birthed a handful of brilliant bands, but none have been as underrated as Death Angel. Whether it's their sporadic release schedule or the break they took through most of the '90s, the band hasn't been recognized nearly as much as their excellent material warrants.

The Concord, Calif. quintet got their start in 1982, and by the time they released their debut album, 'The Ultra-Violence,' a lot of the hoopla around the group was that they were all under the age of 20 years old. It's a shame really, because that and the other releases that would follow deserve more than that.

While their entire discography is worth your while, 'Act III' finds Death Angel at their mightiest. Produced by Max Norman (Megadeth, Loudness), the 10-song album sounds as inspired and as it did when it hit stores in 1990. They cut their teeth playing new wave of British heavy metal covers, and then as part of the aforementioned thrash scene.

There are definitely elements of both styles on 'Act III,' but the songs ultimately reveal something bigger and defiantly unique. Songs like 'Seemingly Endless Time' and 'Disturbing the Peace' rip with thrash muscle propelling them forward while 'Veil of Deception' sounds like something you might hear on a folk-rock record from the early '70s. It's a testament to Death Angel's songwriting and playing prowess that despite the wide-ranged scope of the tracks, nothing feels out of place. 'Act III' is quite simply a landmark album in the metal world.

With the album's 20th anniversary here, Noisecreep spoke with guitarist and chief Death Angel songwriter Rob Cavestany and asked him to give us some insight on the creation of 'Act III' and that time period in the band's history.

Your second album, 'Frolic Through the Park,' was a big hit in the underground thrash scene in 1988, and at that time many of your contemporaries were being signed to major labels. Did you have any apprehension hooking up with Geffen Records?

Not at all man! Quite frankly, we were all so young at the time. I don't think we really knew any better (laughter). But all we really wanted was everything to get bigger and better with each record. When we were approached by Geffen, we were excited because we knew they had the resources to take things to another level than we were used to up that point.

'Act III' sounds much more expansive compared to where the last album was, and I wanted to know if signing to Geffen kind of sparked that quick evolution.

I'm glad you noticed that! I think the leap forward that you hear is a direct result of good timing. We were blossoming as writers and all of that. But it didn't happen because we had signed to Geffen. It was just a natural thing. 'Act III' has some really different stuff for what people expected Death Angel to sound like, and there were some people who thought that Geffen had made us do that. It just wasn't true.

If they had any influence, it was that they supported our progression into new sounds. They kicked our butts in the creation phase of 'Act III' because they made us write and demo a lot more. But I'm glad they did that, because we just got better in return.

That said, did you include any songs that were originally written for 'Frolic Through the Park' or left over from those sessions?

We went into 'Act III' with a clean slate. We wrote around 30 songs for the record. Like I said, the label had us writing a lot. We would hand stuff in and they would just ask for more material (laughter). Our A&R guy was Tom Zutaut, which was a big deal. But the truth is, he was busy with Guns N' Roses, because they had blown up already.

There are two songs on the album ('A Room with a View' and 'Veil of Deception') that are far-removed from the band's origins. Did you have any reservations including those songs on the record?

If it were now, I would have probably second guessed myself, because I think about things more and worry. Back in 1990, we were young and so damn confident (laughter). We were bold about everything we did. 'Veil of Deception' was influenced by Queen, and it showed our diversity since a lot of the bands we played with weren't doing that kind of thing.

The material on 'Act III' is diverse, but 'Veil of Deception' is another planet all together. I've always loved it for its weirdness. The arrangement and vocal parts still sound fresh.

I am so happy you think that dude! It's definitely a weird song when you think about it. That period was amazing for us in the sense that we believed in our writing so much that we weren't afraid of what the listener expectation was. Hopefully we'll play it again when we're out on tour for the next album.

An aspect of 'Act III' that still stands out is the way background vocals are arranged and sound. How much of them did you already have worked out before you went into the studio? Did Max Norman help you put those harmonies together?

In terms of the arrangement ideas with the music and vocals, it was the band. That said a lot of the stuff was still rough. We knew what we wanted everything to sound like with the vocals but Max came in and cleaned everything up. We needed that help and he was great with that stuff.

When 'Act III' finally hit stores, how did your pre-existing fans react to the less-traditional thrash metal stuff?

Oh man, it was intense! Everything was just bigger and better. The reaction from the fans was overwhelmingly positive. We went on tour, and the shows were selling out and the venues got bigger. We would look out at the crowd, and everyone was singing along to the new material. Even 'A Room with a View' got a huge response, and that one isn't exactly thrash (laughter). It was such an exciting time for Death Angel.

Do you think the album was a little ahead of its time?

I'd like to think we are always ahead of our time. I think that has been amazing, and at the same time, a curse. We always seem to miss the commercial thing with our albums, but I'm very proud of them. With 'Act III,' we were trying a lot of new things and we finally had the time in the studio to do that. I'm happy that people like you recognized that we were a bit different. You know what, it's the 20th anniversary of 'Act III' this year! I just realized that during this interview. That's too funny!

All this talk about the album is getting me inspired (laughter). I'm going to have to bust it out later today (laughter).