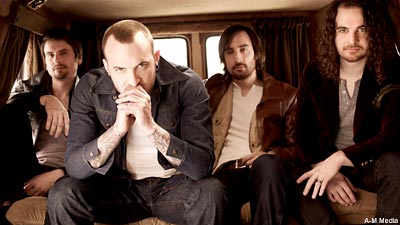 Life is not easy. Just ask Josh Brown. A native of Jackson, Tenn., Brown picked up songwriting and a serious drug habit at age 15. Seven years later, he inked a record deal as the lead singer of the band Full Devil Jacket. After touring with Creed and Nickelback, Brown overdosed on heroin in an Orlando bathroom and put his career on hold while he rehabbed and rethought his life.

Now the lead singer of the rock band Day of Fire, Brown is in a better place in life, having just released his act's third album 'Losing All.'

"At the same time, we're fighting a lot of the same struggles financially. We're still hanging on by the skin of our teeth. But that's OK. We just keep rockin' and doing what we do."

Produced by Rogers Masson (Marilyn Manson, Song of America, the Early Hours), 'Losing All' was a collaborative effort between all the band members, which also includes brothers Joe Pangallo (guitar) and Chris Pangallo (bass), and Zach Simms (drums).

There was one other old friend who lent a hand to the songwriting process -- former 'American Idol' contestant and rocker Chris Daughtry and his bandmates Brian Craddock and Josh Paul.

"They co-wrote on two to three tunes," Brown said. "We toured with those guys for like 90 shows. In the time periods where it felt like everyone in the music business turned their back on us, Chris Daughtry took us out on tour, probably the hottest tour going on that summer. He believed in the band.

"We actually met him before he went on 'American Idol.' We were introducing him to some people in the industry and this and that. Then he blew up and we pretty much lost our deal. Then he took us out and returned the favor. That guy's a good guy. There are not a lot of people in the music industry that help you if you need help. I tell people all the time, the music industry works like this: If you need help, nobody wants to help you. If you don't need help, then people are all about it. They want to jump on the bandwagon. He's not like that. He's a good guy."

'Losing All' is now gathering positive reviews across the music industry. Brown said there's nothing that gives him more joy than when somebody gets his music.

"As an artist or a writer, you put your feelings and your heart out there," Brown said. "When somebody buys your record, they're listening to your intimate thoughts and they're really listening to melodies that connect with you and come out of your heart. When they get it, they understand a little bit of me. They're saying, 'I understand where you're coming from and I accept it.' For me, it's a great thing, man. It's very therapeutic when somebody can understand your music and connect with it."

Brown, whose band is touring with Cold and Nonpoint through April, explained his goal was to be as genuine as possible. He said he believes that's why people are connecting with 'Losing All.'

"The things that led me to writing the lyrics, the circumstances that I was in, were very, very tough," Brown said. "Having your heart broke and having relationship troubles and all these things it's the heaviest thing I've ever gone through at the time. I'm thankful I've got through it and I'm thankful those songs came out of it.

"My goal when I write is just to be honest and genuine. Some songs are just kind of rock songs and they bring up images or ideas. Some songs are straight-up honest about who you are and how you feel. Any time a genuine honest song can come out, I feel alive. I feel whole. It's what I'm supposed to be doing."