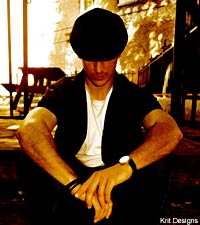 One listen to Davola's Between the Buried and Me-meets-Strapping Young Lad galloping horse-style aggression on their debut EP, 'Dichotomy' and you might be wondering why you've never seen them on any tours. It might be because they are a new band, but it's more likely because Davola is not a 'they,' but a 'he.' The 'he' is Aaron Cloutier.

Cloutier began his career languishing in New Hampshire, where there weren't as many resources for a metal musician to draw upon. Most of what came of the collaborations proved to be unsatisfying. "I just felt like I wasn't doing the kind of music that I wanted to be doing," Cloutier told Noisecreep. "I had been dabbling with writing songs for years, but truth be told, they were more or less song 'fragments' and nothing substantial ever came out of them."

After indulging in a period of "alone time" -- some of which was spent overseas in Italy -- Cloutier began piecing those fragments together and purchased a digital recorder to formally document his solitary songwriting.

Cloutier didn't bother organizing a full-on band to assist in either the songwriting or the recording process. "I guess the main reason and motivation for doing everything myself was that I had all these ideas and had a clear vision of how I wanted the songs to be," Cloutier admitted. "There is always compromise with a band, and at that time, I felt it kind of stifled my creativity to be honest. With Davola, the only person I had to please was me, and I felt that I needed to experience recording from every players perspective. It has most definitely been an education for me on so many levels as anyone who does it alone knows that there are many 'hats' to wear."

Listeners will notice a mix of different genres tossed into Cloutier's heavy, faced-paced grooves. "I basically just make the kind of music I want to hear," Cloutier said. "I listen to a wide variety of music and get bored with just one thing all the time, and my goal as a songwriter is to never do the same song twice. The only real limits I put on the songs is that when they're heavy, they have to be as brutal and extreme as they are catchy."

Davola have released 'Dichotomy' -- mixed and mastered by Cristian and Laz from Ill Nino -- over iTunes, and the recording has already gotten airplay on internet radio. "The response has been amazing," Cloutier said. "I'm getting great feedback from fans, and a few songs are being played by a good number of podcasters, so I'm just focusing on getting the word out to as many people as possible."

Cloutier is also in a collaborative effort with a friend called Animus Rising. He's open to inviting musicians into the Davola fold to perform the songs live and may do so in the future.