The name Darkthrone is synonymous with the Scandinavian black metal scene. But Fenriz, one-half of Darkthrone, has a different viewpoint of the genre as an entity and the band's place within it. As he tells it, the black metal scene had pockets spread throughout the world, while he was interested in all genres. He addresses how totalitarianism is boring and why he doesn't view himself or the band through that lens.

With Darkthrone's latest The Underground Resistance landing earlier this year, Noisecreep felt there was no time like the present to reflect on black metal myths and truths with a musician who was at the epicenter, like it or not.

At this point in your life, how do you feel about Darkthrone's status as a "legendary" black metal band? Are you happy with or comfortable with Darkthrone's legacy?

When we were a black metal band in '91 and half of '92, we didn't even get feedback from the outside world because, as I will show later there, was no SCENE worldwide, only a few people here and there. Also, it was spread real thin here in Norway. Yeah, some people dug our stuff; I had no idea how much the albums would matter to people. We got all that feedback way later. I feel we did decent death metal before the black metal stuff, and a lot of great songs after the whole black metal thing as well.

You have seen and survived a lot of things in the black metal scene --sensationalism, some mainstream press attention. What do you think of the genre in 2013? Is there anything it lacks nowadays that it had back in the 1990s? Is it better? Worse? Are you bored by it? Engaged?

The black metal scene, well, there was no scene in the '80s; it was just enclaves worldwide, a scene formed around Euronymous and Mayhem. When he opened his Helvete [record] shop, we also had a place to hang and the rest from our country also came there to hang; usually before, there were just infrequent meetings. Like I was on my first Mayhem rehearsal in October 1987 but we weren't thinking so much black metal then and it was usual to have contact via letters mostly.

But the Helvete shop only lasted for one-and-a-half years. And while that was set up, I set up my own court of various people at the Elm Street Rock Cafe. Anyone could see me there: rockers, punks, metallers, anyone. So, I have always had a whole range of acquaintances and also like a whole array of different music styles always. So the whole 'black metal scene' stuff seems kinda absurd; it was always mixed with lots of different people and music and definitely didn't feel like a totalitarian thing for long. Totalitarian people are also boring and dull to hang with. For Satan, you need to be the best you can be.

Pick one song on The Underground Resistance and perhaps share a writing or recording story with us. Something we'd only know because you told us, something that puts us in the moment, like we were there.

Well, what was funny was that on the 'Valkyrie' track, the vocals aren't all in key. And why is that? Yes, we fucked up and forgot to put bass on the guitar tracks for the headphones, and no bass guitar either, so it was like singing to drums with a vacuum cleaner underneath and try to hold a decent key...That is not the best conditions for doing melodic speed metal vocals.

And we were ready to party, so we thought 'That's a wrap' and it wasn't until weeks later when Ted sent me the mix that I figured out how it all happened and what mistake we made. We certainly WILL NOT make that mistake again. [Laughs] But it was ballsy of me to put that song first of my songs on the album...not exactly trying to hide the strange vocals.

This album is more thrashy and fast, and less dirty black metal sounding. Was there a purposeful shift in sound?

We haven't sounded dirty black metal since '92! I definitely love thrash and it has been my main genre since '85, but I could never play it; the rhythms of thrash don't suit me. So I don't make thrash. Maybe Ted thrashed a bit on this album, but we're talking about there being maybe four percent more thrash on this one than usual, and eight percent less punk. It's more METAL as a whole, though.

Do you have non-musical hobbies or talents? If so, what are they?

Forest dwelling and fucking, and also a decent soccer goalkeeper.

Is there a track would you recommend Darkthrone fans peruse first on the new album?

[Laughs] I guess it's just the way I just put on a ZZ Top vinyl just now, first track on Side One. But as a child, I had to buy albums to find out about music -it was not like it is with Internet now- and I thought the bands or marketing people tried to camouflage any bad songs by putting the killer song first, so I used to skip to song two if I could listen to it in the shops. Not all shops had listening stations either; one had to buy so much crap to get the really good albums, and as a kid one doesn't have a lot of money either. 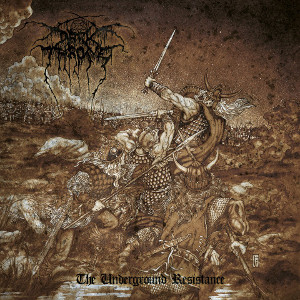 The Underground Resistance is available now via Peaceville Records on iTunes and Amazon.