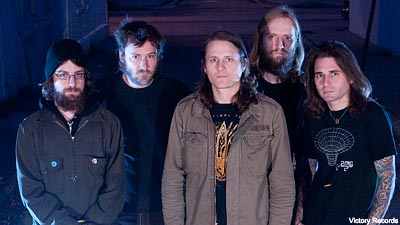 "A Darkest Hour/Dillinger Escape Plan tour is a true representation of underground metal and extreme music in 2010," Darkest Hour guitarist Mike Schleibaum told Noisecreep about why the pair's tour has "must attend" status. "Both of us have been touring and putting out records for easily ten years plus." Actually, this tour marks the eighth anniversary of the band's 2001 tour together, which the guitarist recalls was as dangerous as a stampede of wounded rhinos.

"I think in 2001, over the course of that tour, I watched almost every member of DEP trade merchandise with fans in exchange for fans agreeing not to sue them! Apparently, getting hit by a guitar, mic stand, drum set, or Van during their set is a normal experience!" One thing's for sure: It's never boring at a Dillinger or a Darkest Hour show, and this new tour will be no exception.

"Both bands have continually pushed the boundaries of underground and extreme music," Schleibaum continued. "Both bands are known intense live concerts, and I can honestly say that there is not going to be too many more shows this year that will be as dangerous as these! Darkest Hour and the DEP bring the insanity and I am sure there will be many bloody photos to exhibit for you all later!"

Schleibaum called tourmates Iwrestledabearonce "controversial yet extremely forward-thinking and innovative" and called openers Animals as Leaders "our favorite DC nuevo shredders!" He suggested fans arrive early, "because there won't be a better mix of musicality, chaos, destruction, good dudes and pure riffage coming to your town!"

Current tour dates are as follows: