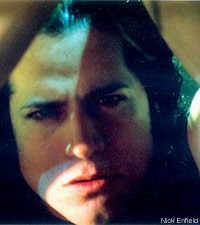 Get ready to celebrate a new sort of 'Sabaoth.' Glenn Danzig -- the man, the myth, the muscles, the Misfits mastermind and, of course, the master of many talents, ranging from composer to comic book publisher -- is ending a six-year dearth of new music. Noisecreep has exclusively learned that Danzig will release 'Deth Red Sabaoth,' his first new studio album in six years, on June 22 through Evilive/The End.

The album is his ninth and was produced by Danzig himself. It was recorded in Los Angeles throughout the course of 2009. The multi-tasking Danzig handled bass duties for most of the album and even played drums on the song 'Black Candy.'

'Deth Red Sabaoth' is 11 songs strong, and some song titles include 'The Revengeful' and 'On a Wicked Night.' There is also the two-parter called 'Pyre of Souls'; part one is said to be dirgy and opens with an acoustic guitar, a piano and Danzig's signature vocals, while part two erupts with electric guitar fury. Longtime Danzig cohorts guitarist Tommy Victor of Prong, who has worked with the singer since 1996, and drummer Johnny Kelly of Type O Negative/Seventh Void, played on the album, which marks the first time Kelly -- who has intermittently sat behind the kit for Danzig live shows since 2002 -- has actually recorded with Danzig. 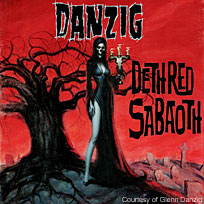 The album has a natural feel, thanks to the way the iconic Danzig attacked the recording process, choosing to steer clear of studio trickery and technology. "I think that fans will really dig this new album," said Danzig in a statement. "I've been told several times that the album has a cool vitality to it, that it sounds energized, and I got that feeling when I was recording it. I wanted to have an organic sound, bigger and thicker, so I went out and bought some 1970's Kustom tuck 'n' roll bass amps to play some of the guitar parts through. You'll hear real reverb, real tremolo on this album, which sounds completely different than the stuff that's done with computer chips."

From that description, it sounds like 'Deth Red Sabaoth' is going to be beefier than Danzig's arms, which look like they could crush walnuts!

The visually-arresting artwork for 'Deth Red Sabaoth' was designed by award winner Joe Chiodo, who has worked on dozens of graphic novels and comic books, most notably 'X-Men Unlimited.' It makes total sense, as Danzig is a noted comic book fan and publisher; Chiodo also works on Danzig's own Verotik publishing line.

Danzig will tour in support of the album, with dates to be announced imminently. Steve Zing, who played in Samhain with Danzig, will play bass on those dates.

Welcome back, Glenn. Our world is a little happier knowing it'll be blackened by a new Danzig album in just under three months.