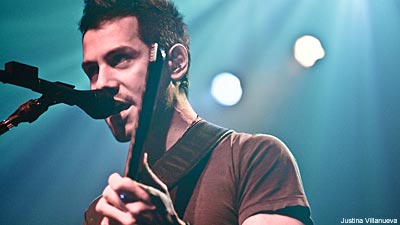 "Hey Paul! I love you!" "Paul! I want you to have my kids!" The first row of people closest to the stage couldn't stop themselves from yelling one-liners at the band. The love for Cynic's guitarist and vocalist Paul Masvidal was certainly in the air throughout the band's entire set at New York City's Irving Plaza on Jan. 30. They played after the Devin Townsend Project and before Between the Buried And Me.

Masvidal was also in a very loving mood. He showed his ultra-hippie side when he motivated some of the crowd to do the half moon. "It's good to do yoga all year long. So we're going to do some stretch exercises."

After releasing 'Focus' in 1993, the band went inactive and disappeared. Yet, they managed to inspire the metal world with that one album for the 15 years they were away. It even made it to Decibel's Hall of Fame. Then, after a rumor of a reunion, the band actually reformed and released 'Traced in Air' via Season of Mist. Cynic also did tours with Meshuggah and DragonForce.

"It's good to be back in New York. We're going to share something special with you. It's going to be on an EP coming out," Masvidal said before playing 'Wheels Within Wheels.' The EP has no release date yet, but that there are already songs written and that it exists is golden news.