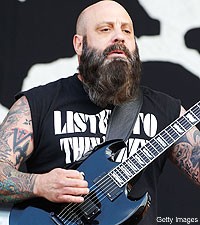 In a recent ''Creep Show' episode, Hatebreed/Kingdom of Sorrow singer Jamey Jasta revealed that his Kingdom of Sorrow bandmate, Kirk Windstein, who also sings and plays guitar strings in Crowbar, likes to streak when he gets drunk. A naked Kirk Windstein is a scary thing, despite how much we love him and his music. Jasta himself likened it to a hostage situation when on tour, since you can't really head to to the bus or chill after a show when Windstein drops trou!

When we exclusively spoke to Windstein about Crowbar signing a new record deal with E1, we had to let him know about Jasta's revelations. Turns out, he was surprisingly frank about the habit.

"Yes, that's true," he told Noisecreep when asked about his tendency to streak. He also admitted he rarely remembers when he strips down to his birthday suit, saying, "I am usually in such a state of inebriation that I don't recall it. Sometimes, when I am at home, I will go to my friend Pat's bar with my wife, and the next day, she'll ask, 'Do you remember running around at Pat's?' And I'll be like, 'No!' I don't know where the habit came from."

Windstein revealed he doesn't streak often anymore and that locals in his native New Orleans needn't run away and cower in fear that he'll get naked. "I don't go out much. I've settled down. I have a 7-year-old daughter and I don't want her seeing videos on the Internet of her dad drunk or naked," he laughed. "I am more of a homebody. I go to the gym during the day and we chill at night, drinking at home. I don't want to be any trouble!"

Kingdom of Sorrow's 'Beyond the Blackest Tears' is out now; Crowbar will commence working on their first album since 2005 in July.