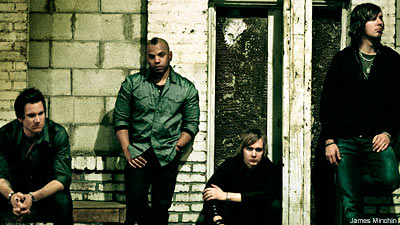 St. Louis' Cavo are stoked. The rockers' single, 'Champagne,' is one of the most-requested songs in the nation, and the act is appearing on the Crüe Fest second stage this summer.

"It's like the main rock tour of the whole summer," frontman Casey Walker told Noisecreep. "It's like some of the greatest bands in rock 'n' roll. You got Mötley Crüe, Theory of a Deadman, Godsmack. We played a show a couple weeks ago with the Charm City Devils. They were some great guys. Rev Theory is going to be headlining the side stage that we're playing on. We toured with those guys for about two or three weeks. They're great guys. It's going to be a lot of fun."

Cavo -- which also includes guitarist Chris Hobbs, drummer Chad La Roy and bassist Brian Smith -- is burning up the rock radio charts with its debut single 'Champagne.' After hitting airwaves in April, the track has reached an audience of more than 53 million, scoring 151 radio adds amongst all rock formats. It's claimed the number three slot on active rock, broken into the Top 10 on the Mainstream Rock Chart, and gone Top 30 on the Modern Rock Charts. 'Champagne' is also in rotation on SiriusXM's Octane playlist.

"It's kind of crazy," Walker said about the success of 'Champagne.' "I still feel like that guy that does cable in St. Louis. People are starting to stop me on the street [and say], 'I love your song, man.' The best thing is, at the shows, people are actually singing the words back to us. That's the greatest compliment that you could ever give a band -- that you know their song so well that you actually sing the words for them."

'Champagne,' which had the highest R&R Active Rock chart debut for a new artist since Avenged Sevenfold's 'Bat Country' in August 2005, is the first single from Cavo's debut album, 'Bright Nights * Dark Days.' Produced by David Bendeth (Breaking Benjamin, Paramore, Red Jumpsuit Apparatus), 'Bright Nights * Dark Days' also includes the track 'Let It Go,' which was featured on the 'Transformers: Revenge of the Fallen' soundtrack. Walker said the album was born out of an EP that sold well in St. Louis.

"The first song we ever wrote on that album was 'Useless,'" Walker said. "We had just got our bass player Brian. We decided to start writing new songs with him to see how things went. He had more of a rock edge. He was bringing out, with songs we had already written, a little bit more of an edgier side to us. So we all sat down and decided to write new songs. We weren't planning on a new album. We weren't planning on anything."

'Useless' was written, and then when the band moved into practice space at Smith's house, the flood gates opened.

"'Champagne' was written," Walker said. "Then, in the same week, 'Let It Go' was written. Then we were sitting there with three and four new songs and our managers and the whole band said, 'I think we have something here, an EP at least. Let's start shopping.'"

Cavo put together a four-song EP, which fared well in St. Louis and 'Champagne' started picking up.

"The requests were going crazy," Walker said. "That's when labels started calling. That's how the album evolved. It started from just sitting in a basement, 'Hey let's write a song or two.' Then, the next thing we knew, we had a core of a pretty good album."