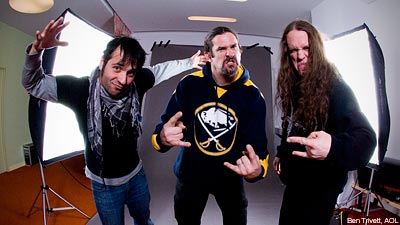 For the year-end edition of ''Creep Show,' we followed the 'more is more' logic. We figured that if interviewing one artist a week is awesome, then talking to three bad-ass metal dudes would only triple the fun. So we recruited Cannibal Corpse drummer Paul Mazurkiewicz, Unearth guitarist Ken Susi and Hate Eternal frontman/producer extraordinaire Erik Rutan to join us in person in the studio.

The three musicians were touring together on the Decimation of the Nation 2 Tour, along with headliners Hatebreed and openers Born of Osiris. In addition to chatting with the accomplished rockers about the tour, extracurricular activities and their plans for 2010, music journalists Jon Wiederhorn and Chris Harris involved them in our year-end wrap up, in which we discussed some of the best, worst and most forgettable metal moments of 2009.

After the podcast, the musicians rushed to New York's Nokia Theater for a face-shredding show that left us blinded and crawling across the floor, feeling around for our eyeballs to insert back in our skulls. The next night, all the bands except Born of Osiris did the same for a now-eyeless crowd in Worcester, Mass. Sadly, the blizzard of 2009 canceled the final date of the show Dec. 20 in Philadelphia. It may have been especially sad for Rutan, who had tickets to see his beloved Philadelphia Eagles game that day, and may not have been able to attend. Then again, maybe he braved the storm with the devil behind him and caught their decimating victory.

Regardless, watch this space for the full 45-minute-long podcast, which will be up later this week.