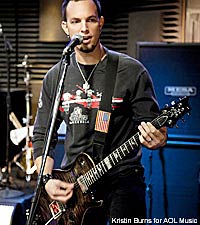 Admittedly, when you think of Creed, the last thing that would come to mind is the funereal stomp of old-school Celtic Frost. Albums like 'My Own Prison' and 'Human Clay' helped crown Creed kings of modern rock radio in the late 90s. When the recently reunited band passed by AOL's Los Angeles studios to film an exclusive performance for our Sessions series, something about Mark Tremonti's guitar caught our eye. Right there, on the bottom of his guitar, was a sticker of former Pantera / Damageplan guitarist and all-around heavy metal legend Dimebag Darrell. We had to ask Tremonti what the deal was.

"Yeah I grew up in Detroit so the heavier the music you listened to, the cooler you were, you know? So at the time Slayer was the heaviest band. They were one of my favorite bands of all time," gushed the platinum plus rocker. But how far underground did Tremonti go in his metal tastes? "Metallica, you know, Celtic Frost, or "Keltic," however you want to pronounce it, Venom and Morbid Angel, all the heavy stuff you can get your hands on we were into."

Yes, you read that right. The guy from Creed told us he rocked out to the sounds of Cronos and Tom G. Warrior! Tremonti explained why Creed hasn't had any songs that sounded like "Chapel of Ghouls" so far, "It just never kind of spilt over into the Creed sound, because when we all met, these guys made fun of it."

Check out the exclusive video below for proof that we're not making this stuff up: