When and if the musical history books ever bother to acknowledge the merger between hardcore punk and heavy metal, the obvious band they will point the finger to is Raleigh, North Carolina's Corrosion of Conformity Their second LP, Animosity, released in 1985 is the bible when it comes to that shit.

But before Animosity came Eye for an Eye, the band's self-released debut from 1984. If you want to hear the genesis of the metal/punk fusion that dominated the rest of the '80s, this record is the ticket. The sad thing is though, if you wanted to hear it up until now, you'd probably have to pay enormous price on the collector circuit. But the dark lords must be looking up upon us these days, because the Candlelight label reissued the Eye for an Eye today, complete with liner notes, photos and flyers. Hot damn!

Since this is such a monumental occasion, Noisecreep got C.O.C. guitarist Woody Weatherman on the horn and let him wax poetic on those days of yore. Dig it!

Why did it take so long for Eye for an Eye to be reissued?

To be honest, we were never really thinking about it all this time. The last time it was available was when Caroline reissued back in '89 or '90. We were so busy playing and recording new stuff all this time that it didn't really factor in. When we started dealing with Candlelight, they asked us why it wasn't re-issued yet and we didn't really have a good answer! When they said they'd put it together with liner notes and pictures and flyers from the time, we thought it sounded like a cool idea, so we gave them our blessing.

I remember when the initial release of Eye for an Eye came out in '84 and the buzz for the record came out nowhere. It was really hard just to find a copy.

The only way you could pretty much get a copy of it was to come to one of our shows and buy it! At that time, there was not that much to go around in the hardcore punk scene. So once people showed interest in a record you put out, it was something of a hot commodity. That first tour of the country we did with that record was a real trip. People came out to these shows because it was a hardcore punk show in their town; it didn't matter who was playing. They just wanted to buy the records and be a part of it. So, if you went out on the road with a record and went to towns and traded off gigs in your town for gigs in some other bands town, you built up some momentum and I guessed it worked for us.

Listen to 'Tell Me'

You're pretty much known as the band that brought the metal dudes and the hardcore punks together.

Yeah, it's kind of weird to think at some point there was some big division between those two camps, but there was. It wasn't unusual to us to be on tour and play with the Bad Brains one night and Slayer the next, but there was some real animosity between both the metal heads and the punks, and I think it came more from the punk side. To me, I liked all those bands and I liked all the metal bands that came before them when I was a kid. We always liked all kinds of music.

Can you remember a specific point where the underground metal guys at the time started to check out C.O.C.?

I remember playing at show in California. We played in the Valley with Slayer where we were the only non-metal band on the bill. The whole crowd stood in the back with their arms crossed. It's not like they were giving us the evil eye or anything, they were just confused! They definitely were like 'What the hell is this?' But the Slayer guys were into us and that led to us signing with Metal Blade for Animosity. I also remember a show on that same tour at Ruthie's Inn in San Francisco where all those guys in those Bay Area thrash bands like Exodus and Death Angel came out and they were into it. After that, you had the Metallica dudes championing this stuff and that was it; it really took off.

You mentioned Animosity, which is pretty much the record that people look at when it comes to the whole hardcore punk/metal crossover of the mid-'80s. Why hasn't that been reissued yet?

I don't know. That's up to Brian Slagel and Metal Blade. I'd have no problems with it being reissued. We're playing some of that stuff on this upcoming tour, so it would be cool for it to be out there. I'm sure you can still find it somewhere. You can definitely find it for free on the internet somewhere!

When the whole hardcore punk/metal crossover happened, what do you think were the positives and the negatives of that whole thing happening?

The negatives were definitely all the fighting. In the beginning, we'd try to put on shows with us and a metal band on the bill and there would just be fights. Some tough guy metalhead would try to beat up a punk or vice versa and it would just be a mess. Again, it seems weird to look back and think something like a leather jacket or long hair could cause such problems, but it did. The positives to me were meeting the people who were just into the music and didn't care about all that petty shit. It was something new, that's for sure.

Corrosion of Conformity is one band from the time frame we're talking about who has actually stuck it out and continues to produce new material. What are your thoughts on some of the bands from the early '80s hardcore scene who pop out of nowhere to reunite? It seems like these days you get these festivals that are the equivalent of a '50s revival show, you know?

[Laughs] I know what you're talking about, man. Hey, I'm fine with it, go for it. But yeah, sometimes it can seem a little weird when these guys start doing this stuff. The reason we've never been on this nostalgia trip is we were always moving along doing what we wanted to do. That's why a label like Candlelight has to ask us to reissue Eye for an Eye! Because we're concentrating on what we're doing in the here and now. The one thing I'm grateful for is we named our band Corrosion of Conformity. We didn't name it after a president of the time or anything.

Yeah, you didn't name yourselves 'Reagan Death' or something.

If we did man, we'd be headlining all the festivals in Europe man! We'd be sittin' pretty! [Laughs] 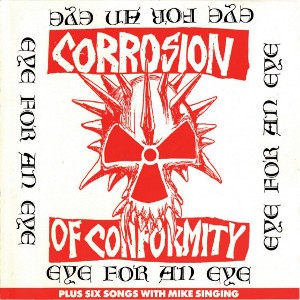 The reissue of Eye for an Eye is available from Candlelight and is ready to order here.