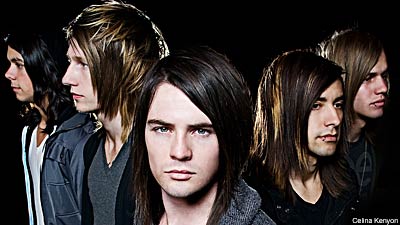 While out on tour with Agraceful, Memphis May Fire and This Romantic Tragedy, Confide are hard at work on the follow-up to their debut 'Shout the Truth,' which is set for re-release Sept. 9. "It's heavier than 'Shout the Truth,' but it's also catchier, too," singer Ross Kenyon told Noisecreep about the new album, due out in 2010. "It kind of like has really heavy verses with really catchy, poppy choruses."

To hone their writing skills, Confide are considering asking Tom Denney, formerly of A Day to Remember, to pen the songs with them. Their first choice for producer is Joey Sturgis (Devil Wears Prada).

"The writing process is a lot different than when we wrote our first record," said Kenyon, a Manchester, England native who joined the Los Angeles-based band two years ago. "We were just kind of locked in a practice room that was a tiny square room with all-white walls. It was horrible. It was like being in a prison cell. We were stuck in there for six months. It took us a really long time to write the album.

"We never experienced writing a whole album before," he continued. "It was really hard, and it took its toll on us. Writing this record the new record, we've only been writing for a month now and we've already got eight songs. It's been really different. We've been writing in our drummer's studio. It's been a more relaxed feel. It's a really nice studio instead of that prison cell we wrote in last time. It's just really relaxed and fun."

Kenyon, who writes most of the lyrics while the band pens the music, explained that he felt very pressured during the pre-production process for 'Shout the Truth.' "We just got signed to Science [Records, Confide's former label]," said Kenyon, whose band is now inked to Tragic Hero Records. "They said, 'Go in this lock-out room and write a record.' I felt really pressured. Now I just don't feel any pressure. We're all kind of on the same page as to what we want the CD to sound like. It's flowing out of us really well."