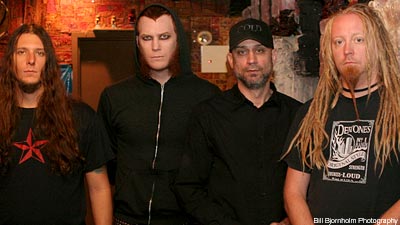 "I think if you're good to people throughout your career -- your fans -- it always comes back to you, and this is kind of what has happened to us and we're very blessed," theorizes Cold frontman Scooter Ward. "Everything with Cold right now feels so good ... with the band and the management team. It just seems like everything is finally coming to us."

Maybe everything really is finally coming together for Cold. The alternative rockers are back together, putting finishing touches on their new album 'Epic' and gearing up for a tour with Nonpoint and Day of Fire. Cold played a few shows in 2009 while working on the songs for 'Epic.' Even though the album isn't due until the end of May, Cold are aggressively adding new tunes online. Ward says he's amazingly surprised at all the positive reaction to the new work.

"These days, the whole new record, the new tracks, we haven't gotten any bad [comments]. It's kind of overwhelming," he admits. Positive comments aside, Ward will be the first to admit the band has taken its fair share of criticism. Then there's always the group of people who seem to troll message boards, looking to complain about any and every band.

"Back in the day, we used to get the haters," he recalls. "Of course, every band has people that hate them and love them. But we had some negative stuff. We change a little each record. It's nice to see [Cold fans] accept that and move on with it. The lucky thing we have with the 'Cold kids' -- our fans -- is that they've been around forever. I remember when we first started out, it was just painful.

"It seems like these people, you know, they make their life on Blabbermouth. They make a name for themselves by bashing someone. It's really funny. It's like they are rock stars in their own little world, and it's just funny that someone would want to get on there and bash a band ... they don't really know. Maybe they were a fan of the band, and they just don't like them anymore. I don't know."