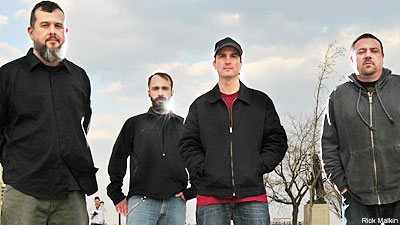 Maryland rock vets Clutch hit the road this week for a 15-date tour with Wino and Maylene and the Sons of Disaster. Look for that tour to hit parts of the Midwest and the south before wrapping up in West Chester, Pennsylvania. Immediately following the tour, the members of Clutch will be performing as The Bakerton Group at Washington DC's 930 Club. Here are the full listing of dates; look for dates with Baroness to pop up in July.

Clutch is currently putting the finishing touches on their ninth studio album, 'Strange Cousins From the West,' which will be out July 7 via the band's own Weathermaker Music. The album was produced by the band along with J. Robbins at Magpie Studios in Baltimore.