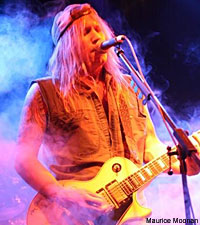 After stints with both Black Lotus Records and Locomotive Records, Trans-Siberian Orchestra and Savatage guitarist Chris Caffery opted to take the do-it-yourself route for his fourth solo album, 'House Of Insanity.' He formed his own label, Face The Music Records.

"Just when you got too busy to handle anything else, you go and take on your own record label," Caffery told Noisecreep. "What I like about it is, the fact that I'm learning a little bit more about the business all the time. Eventually, as you get older – in 10 or 15 years – I'm not going to be on stage. But I'm going to want to be in the business in some way, shape or form. So by doing this, especially at a point in time where the business is changing so much every day, I'm not only learning what to do for myself, but what to do in the future. It's been a lot of work. I've got to be honest with you; sometimes I look at myself and think – what the heck did you do? But I'm actually able to get things done better on my own. So far, even through just the initial digital and presale release of House Of Insanity through my website ChrisCaffery.com, I've outsold what my previous label did with 'Pins And Needles,' without even doing a radio campaign or any kind of ad campaign; just on my own because I care about it."

Running your own operation certainly has its advantages. "At labels – everybody's fearful of their jobs, they're fearful of spending money. Obviously you can't sell anything if you don't promote it. But there were situations with my previous label where they didn't want to spend a penny promoting the record. It was unavailable anywhere. Then they turn around and say, 'You didn't sell anything, so we're not going to work with you.' That's ridiculous. Me not selling has nothing to do with me. I play in front of 600,000 people a year with TSO. If I'm not selling records, it's not my fault. I could spit and burp on an album and it should sell a certain amount. If you can't do that, you can't blame me. At some point, the label has to accept some responsibility. From what I've seen, just out of the box doing this by myself, the sales are better than what I had with the label; and I haven't even started promoting it yet."

Aspiring artists shouldn't submit their demos to Face The Music just yet though. "I think, right now, I'll keep it for me and releasing some of the projects I've been involved with. I would like to work with some other artists, but I am so completely swamped that, for me to handle everything I'm doing myself and then say, I've seen this band in Omaha, Nebraska and they're amazing. I'm going to sign them to my label. I can't dedicate the time to that right now. I don't want to have anybody ever say, 'I worked with Caffery and he messed everything up.' If I do something, I'm going to make sure it gets done right and everybody will be really happy with it."