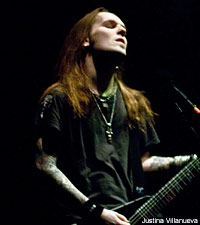 It's been two years since Children of Bodom have issued an album's worth of new material, and now, word is the band will soon return to the studio to track the follow-up to 2008's 'Blooddrunk.' According to reports, bassist Henkka Seppälä says the band is plugging away on the new disc as we speak.

"It is great to have a new rehearsal space. We can rehearse whenever and as long as we want. And this is a new thing for us as a band," Seppälä says. "So making new songs is now really different than before. It's been really exciting, once again, to gather at the rehearsal space and start jamming the new ideas [frontman] Alexi [Laiho] has in mind for. I'm really excited now, and looking forward every day to get there again to see what's new this time."

Seppälä says Children of Bodom will start recording the new disc "in the middle of next summer. And then we will take our time to track the stuff, then mix it and master it. Then the labels need their time to prepare the release ... so unfortunately, the release won't be this year, that's for sure. We will let you know as soon as we know the date."

Bodom will be keeping fans abreast of what they're up to, says Seppälä, through a series of studio blogs. Seppälä did not give any descriptions of what the new material's sounding like.

Last year, Bodom released an album of covers called 'Skeletons In The Closet.' The band wrapped a U.S. tour back in the fall, with the Black Dahlia Murder and Skeletonwitch.