With Halo of Blood, their eighth studio album, hitting stores on June 11, Children of Bodom have issued a new track called "Transference" to whet our appetites. Check out the track here.

The Finnish metal beasts recorded Halo of Blood with longtime engineer Mikko Karmila and Hypocrisy mainman Peter Tägtgren who also worked with Children of Bodom on their Follow the Reaper and Hate Crew Deathroll albums.

"'Transference' has an evil vibe to it which I wish I knew how to explain because it still gives me chills," says Children of Bodom guitarist/vocalist Alexi Laiho. "This is one of our favorite tracks from the new album. Enjoy!"

"Transference" is available on iTunes now. Fans who pre-order Halo of Blood on iTunes in advance of its release can download the new song immediately. 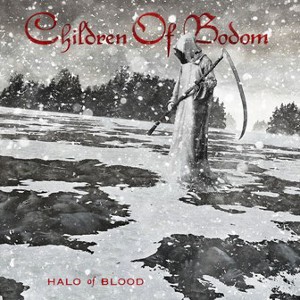 6.) The Days are Numbered

In support of Halo of Blood, CHILDREN OF BODOM will tour North America alongside Rob Zombie, Mastodon, Amon Amarth and more as one of the featured acts at the 2013 Rockstar Energy Drink Mayhem Festival. Set to launch June 29 in San Bernardino, Calif., the five week trek will run through August 4 in Dallas, Texas. The just-announced itinerary for the 2013 Rockstar Energy Drink Mayhem Festival is as follows:

Follow @Noisecreep on Twitter | Like Us on Facebook | Sign Up for Our Newsletter
Filed Under: children of bodom, ChildrenOfBodom
Categories: News
Comments
Leave A Comment
35 Important Rock + Metal Albums Turning 20 in 2023
The 100 Best Rock + Metal Albums of the 21st Century
20 Most Unexpected Rock + Metal Covers
Children of Bodom Officially Open Their Own Bar With a Museum and Sauna
Children of Bodom Members Open up on Alexi Laiho’s Late Career Behavior + Band Split
10 Best Metal Covers of Hit Pop Songs
Heavy Metal Burgers Around the World
20 Teen Angst Anthems to Melt Your Icy, Black Heart
27 Bands Who Were (Mostly) Teenagers When Their Debut Album Came Out