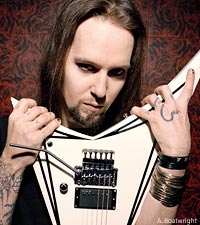 "Pain killers" are the keys to Alexi Laiho getting through his shows with his band Children of Bodom as the guitarist/vocalist recently broke his shoulder getting out of his bunk bed on the tour bus.

"It was a normal night," said bassist Henkka Blacksmith in an interview with Noisecreep. "He was in the bunk. Everybody went to bed and he sleeps in the highest bunk. Then at some point, he just woke up and he was trying to get out of the bunk at the same time the bus a little bit turned. It was bad timing. He fell down on the floor all the way from the bunk. I woke up and I helped him up. He was complaining that his neck hurts a little bit. Then he went back to bed."

A couple days later, Laiho sought a doctor's advice, according to Blacksmith.
"It was pretty bad," Blacksmith said. "X-rays showed there's a broken shoulder and internal bleeding. It should take six to four weeks to heal."

In a statement posted on the band's Web site, Laiho said he is in intense pain.
"I am going through a great deal of pain every second that I am awake," Laiho explained. "However, I can still play the guitar and I will give everything I have to try to finish this tour and play every remaining show!"

Never one to cancel shows, the Finnish metal band decided to carry on. Laiho will even forge ahead on the European shows scheduled after Children of Bodom's U.S. tour with Lamb of God ends May 15.

"He can play," Blacksmith said. "The thing is the movement of the arm is OK for playing. It's a little bit painful. I guess. He cannot move like normally. He can't do any tricks, he just has to stand and play. He has to take it easy to get it to heal.

"He just has to take a lot of painkillers I guess. It's a big thing when you start canceling shows. If there's anyway we can do it, we'll do it. I think we've canceled two shows in our career. It would have to be pretty serious to do that."