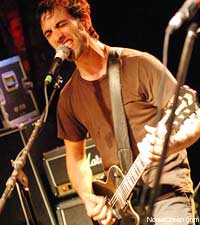 Megadeth will be playing 'Rust in Peace' in its entirety on their upcoming tour, the same one in which Testament will be performing their debut album, 'The Legacy.' With their latest EP, 'Planets of Old,' just released on CD, would post-hardcore quartet Cave In follow suit and perform a classic album like 'Until Your Heart Stops' in full?

"If the money's right, we'll consider it!" frontman Stephen Brodsky said to Noisecreep, laughing. "I haven't been to a show set up in that style before, but I think it's a great way to inspire a band to get out of their box, so to speak."

Brodsky continued, "From doing these past few Cave In shows, there were definitely some people that complained we did our same set that we did for our first show in July for our first show back in four years," Brodsky continues. "It's a nice method to inspire a band to shake off the rust a bit and re-examine who they are. For the fans that continue to support a band, they need that -- they need some variety, and they need a reason to want to buy a ticket to go back to that show.

"It's also a reflection of the times," he admitted. "Where people really do have a voice, and they're able to voice that and put together events that are reflective of their visions. The band has a choice to honor that or not, depending on whether it makes sense to them."