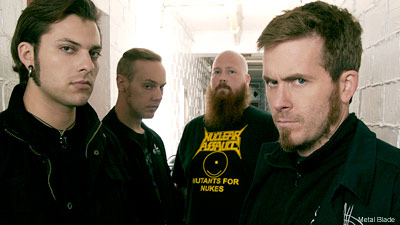 Most metal fans are more than well aware of the fact that Cattle Decapitation are a grind/death band with a vegetarian, animal-friendly frontman in Travis Ryan. Ryan actually performs on a non-Cattle Decap track called 'Don't Kill the Animals,' which was originally recorded by Lene Lovich and Nina Hagen. Jarboe of the the Swans was the one who persuaded Ryan to appear on the song.

"Jarboe told me she was going to guest appear on her friend Nebelhexe's cover version of the track and thought it'd be a good idea for us to both appear on the track, given my history on the subject," Ryan told Noisecreep. "I'll basically do whatever Jarboe tells me to do! But there was no arm-twisting. I've been a Nina Hagen fan for years. I broke out my old dusty 12-inch version of PETA's 'Animal Liberation' comp from the late '80s to re-familiarize myself with the track. They sent me the music, and I went in and knocked it out." Despite his efforts, the vocalist wasn't exactly thrilled with the end result. "I wasn't happy with much of it and luckily, they only used the parts I was actually content with. It came out very eerie, but I'm glad to have had a hand in it," he said.

In honor of the song, Ryan also shared his favorite things about his cruelty-free diet.

Physical health: "I feel much better physically, and about myself, in general. I used to get bad stomach cramps when I was a kid and through high school. I think I was just pretty intolerant to meat and the digestion of meat products."

Anti-industrialism: "It's awesome to be one less human helping to perpetuate the gigantic killing machine that is the American meat industry. The industrialization of death and its many harmful byproducts is the problem."

Action over words: "Knowing that you're doing something positive. It's an awesome alternative to religion, something that is, in actuality, just a morality crutch anyways. Direct action over the belief and utter fear of ghosts and figments of the human imagination in its most ancient form."

In other Cattle Decap news, the San Diego-based band will tour with Soulfly and Prong this October, and bassist Troy Oftedal has exited the ranks due to the ever-popular "musical and personal differences." Band friend Rahsaan Davis will fill in for the time being.

Cattle Decapitation's latest effort, 'The Harvest Floor,' is out now.