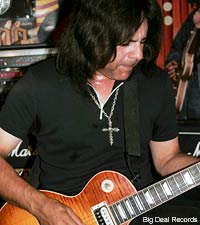 Mike Albert, who played guitar for Megadeth on their tour for the crucial classic, 'Killing Is My Business ... and Business is Good,' is one of those guitarists whose name may not ring any immediate bells, but he's certainly turned heads in rock circles over the years. Albert played with the Frank Zappa-produced Ruben & the Jets and was a session guitarist for CBS. Despite his impressive resume, the axeman wanted to step out from behind the shadows and into his own light.

"I had many offers to work outside of metal, such as with the Red Hot Chili Peppers and Alice Cooper, just to name a few," Albert told Noisecreep. "But I didn't want to be a side man anymore. After years of working with other people in the industry, I decided to form my own group: the Mike Albert Project. Before our new album, 'Afterlife,' I did two other releases, which were 'Feast or Famine' and 'Hypnotic.' Both of which got a lot of good press worldwide, but it wasn't quite the lineup for me."

It took Albert eight years to find the members who comprise the current incarnation of the project. The band is currently signed to Big Deal Records, a label carrying the distinction of winning a Grammy for Motörhead's cover of Metallica's 'Whiplash.'

The new album "is a string of songs written by myself and lead singer Richard Schroder," Albert revealed. "All the songs are personal, about people and real life experiences. It's not your typical heavy metal album. It has a lot of cross-currents with hard rock, alternative and melodic metal, covering all the spectrum of styles. We are gearing up for a tour now and hope to be in a city near you."

'Afterlife' is in stores now.