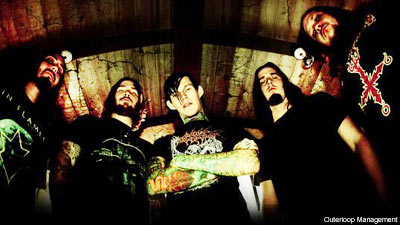 Despite the clear-cut sales and big crowds for bands labeled 'deathcore,' many acts are trying to escape that moniker. There are many critics, and they are vocal. But not Carnifex. They don't care. "Were not one of those bands trying to escape the banner of deathcore," vocalist Scott Lewis told Noisecreep. "I know a lot of bands try and act like they have a big problem with that, but if you listen to their music, they are very 'deathcore.'"

Lewis continued, "I know that there is a lot of resentment towards deathcore and kind of younger bands -- some of it warranted. I definitely see some of the monotony in some of the bands that came out. But some of the bands are writing genuine music that they enjoy. If you've got a genuine passion for it, then it's art. It's music and you can't really judge it."

The band's newest release, 'Hell Chose Me,' is closer to classic death metal, boasting huge helpings of blast beats rather than constant slowdowns for crowd kickboxing. Lewis explains that this change was not a focused attempt to no longer be called a deathcore act, like some bands that run from the tag. "We were kinda, 'You got a riff? Oh that's awesome,' or ',That sucks.' That's what came out. We didn't sit there saying, 'Oh, that's definitely a deathcore riff, so that can't be in the song.'"

The band even shows off some black metal influences this time around by way of the lay of the songs and Lewis taking his growl to a blackened shriek, which he still beams in excitement over the band incorporating those elements. He commented that only a few fans have come to him picking that out. But still some fans seem reluctant to faithfully follow the band on this progression.

"Some fans ask, 'What happened to all the breakdowns?' There are breakdowns in every single song still. I don't know what your talking about," Lewis laughs. "Some of them are not as obvious as they hoped."