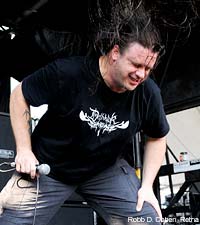 Having toured pretty much nonstop since the February 2009 release of their latest album, 'Evisceration Plague,' Cannibal Corpse are taking a well-deserved rest when they return from their current South American tour on Feb. 21. Then they'll start working on some new songs for their next record, and before you know it, they'll be back on another North American headline tour.

The Evisceration Plague Tour launches April 20 in Orlando, Fla. and runs through May 15 in Tampa, Fla. Skeletonwitch and Lecherous Nocturne. 1349 will also open until May 6 in Los Angeles.

"We are very excited to tour with 1349, Skeletonwitch and Lecherous Nocturne," said bassist Alex Webster. "This is a killer lineup of bands that we're sure our fans will love. Prepare for an evening of pure sonic brutality!"

For Skeletonwitch, heading out with Cannibal Corpse is something they could only have dreamed of when they discovered the band as teens. "I bought [Cannibal Corpse's 1991 record] 'Butchered at Birth' when it first came out because the cover was so brutal," vocalist Chance Garnette told Noisecreep. "I saw them on that tour and have been hooked ever since."

While Skeletonwitch have never toured before with Cannibal Corpse, several of the members met Webster and vocalist George 'Corpsegrinder' Fisher in Cleveland during last summer's Rockstar Energy Mayhem Festival. "I was really impressed with how genuine and down to earth they were," said guitarist Scott Hedrick. "There was a huge parking lot party for all the bands and I remember watching an extremely wasted [Skeletonwitch drummer Derrick 'Mullet Chad' Nau] try to talk Corpsegrinder into playing a game of Twister."