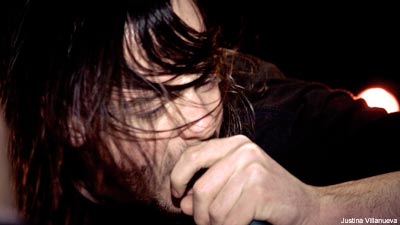 "You don't stand in the front row and not clap your hands in the air," Cancer Bats frontman Liam Cormier said to a couple of fans at Highline Ballroom Feb. 4. He wanted to discipline the mostly underage crowd at the Manhattan, N.Y. venue. After watching the metal/punk band's entire set, I can say that they righteously earned their tour guarantee and merch money for the night.

Cormier also said, "Let me ask you something. Have you ever seen us Canadians on this stage before? You must be saying, 'Who are these four a--holes, and what are they doing in New York?' Well, we're the Cancer Bats and we're gonna make this floor sweat!"

Midway through their set, Cormier dedicated a song to New York City natives Star F---ing Hipsters -- who opened the show that ended with Aiden and Anti-Flag.

"There are some really great people in that band," Cormier said. He was most likely referring to the band's founder, Stza of Leftover Crack and Choking Victim.

Afterwards, the Cancer Bats vocalist announced that they have been performing a cover song. "Would you guys like it if we did a cover of a little hometown band called Beastie Boys?"

With the crowd's approval, they dove into a heavily distorted, circle pit-worthy cover of 'Sabotage.' It was the kind of moment that made me realize how many kids would be wearing Cancer Bats shirts to school tomorrow.

Following their tour with Anti-Flag and Aiden, Cancer Bats will embark on a full Canadian tour with Billy Talent, Alexisonfire and Against Me! -- which begins March 3. You can also look forward to their next release, 'Bears, Mayors, Scraps & Bones.' It is due in stores April 12.