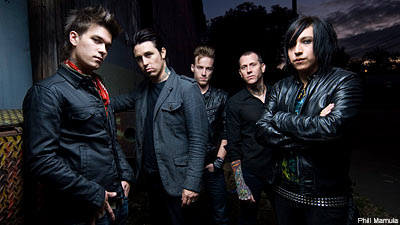 Burn Halo is a straight ahead rock 'n' roll band. Still, the members of Burn Halo love music of all genres and spent a lot of 2009 listening to diverse albums while driving across the country on tour. For fans and musicians alike, 2009 was an interesting year in music.

"We're all big Lady Gaga fans, and that's always on the air for sure with us. To me and to everyone else in the band, good music is good music and it doesn't matter where it comes from or who is playing it," Burn Halo frontman James Hart admits to Noisecreep. "If it's something we like, then it's something we're into."

Hart says he and the rest of his band loves the new Keith Urban record. Of course, the guys in Burn Halo also enjoy metal bands, too. "It's not that we don't like the heavier ... metal stuff," continues Hart. "You know, if the last Avenged Sevenfold record would have come out in 2009, I probably would have put that right at the top of the list of the records we loved in 2009. Or Alice in Chains -- love the new record! So glad that they decided to put a new one out."

With so many different tastes in music, Hart says it's possible he might record a country album in the future. For now, however, the next priority is to support Burn Halo and to become a more prolific songwriter.

He said, "One of things I want to get into is songwriting and collaborating and writing my own songs: doing what some of these big songwriters do and co-write for records or pitch your own songs for records and labels. You know, I think I'd be good at writing just about anything."

Burn Halo is currently on tour with Smile Empty Soul.