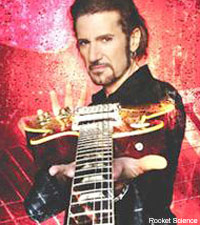 When former Kiss and Meat Loaf guitarist Bruce Kulick is reminded he has had an amazing career, he takes it in stride. "I can't say I've had a boring career, that's for sure," Kulick told Noisecreep with a laugh. "Certainly, there's no doubt that the Kiss years were really cool. A lot of people just know me for that. For example, though, there's [the 'Bat Out of Hell -- The Original Tour' DVD] out of Meat Loaf, when I toured with him. My brother and I were dueling guitar players backing Meat on the original 'Bat Out of Hell' tour, which was quite successful. We went around the world and of course sold millions of records then and Meat's still selling millions of records with 'Bat Out of Hell.'

"That was kind of interesting," continued Kulick, who is the current Grand Funk Railroad guitarist. "What's really cool about it is that if you buy 'Bat Out of Hell' now, there's a couple live tracks on the regular studio album, too, that they end the album with. That's my brother and I playing. Then this DVD, which just came out a couple weeks ago, is a concert out in Germany in '78. My brother and I look way different but still playing with all the passion that we love to play our instruments with."

As for Kiss, Kulick said he still keeps in touch with the members of the band, particularly bassist/singer Gene Simmons and guitarist/singer Paul Stanley. He missed a couple of California Kiss shows, but eventually caught them in Anaheim, Calif. "I went there really early so I could see them at soundcheck to hang out," Kulick said. "I'm real proud of them doing a new record, which is something Gene used to not want to think about. I think it was the right thing to do. Paul took the initiative and off he went."

Kulick is also proud that his third studio CD, the appropriately titled 'BK3,' is set for release on Feb. 2. The follow-up to 2003's 'Transformer' includes special appearances by Simmons and his son Nick, John Corabi, Doug Fieger, Tobias Sammett and Eric Singer and Steve Lukather. It was produced by Jeremy Rubolino with Kulick. "I'm super enthused," Kulick said. "It takes a long time for me to do it. It was never about the time. There was no compromising about what I was trying to accomplish.

"My best Kiss album, I felt, was [1992's] 'Revenge,' even though there were highlights through the years. I wanted this whole record to be the best of me. Having the opportunity to have all these really talented special guests I knew would be the icing on the cake. I still had to have good songs and great productions and great sonics on the record."

Kulick explained that Rubolino challenged him before 'Transformer,' but he was already set on producing the collection himself. He decided he would call Rubolino when he was ready to record 'BK3.' This "journey" began in 2004. The "recipe" of the record started to change when he recruited Gene and Nick Simmons to appear on 'BK3.'

Watching the transformation of Nick Simmons was magical, Kulick said. "I think the [collaboration] that I'm most fond of is the one with the least experience," Kulick said. "It was great to see him evolve and get comfortable in the studio. It was Gene's son Nick. He's so talented and bright and very aware of his place -- meaning his dad was uber famous and uber successful, yet he knows he's going to have to work at what he wants to become. He's not in anyone's shadow. It was kind of fun to see him be creative lyrically. All those lyrics are written by him."