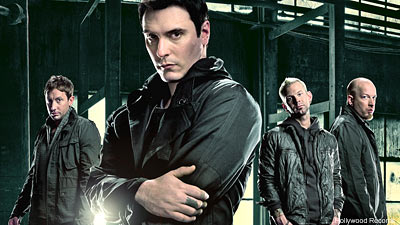 Breaking Benjamin's new album, 'Dear Agony,' debuted on the Billboard Top 200 album chart at #4, behind only Mariah Carey, Paramore and Barbra Streisand. The Pennsylvania rock band is also slated to headline a tour this fall with Sick Puppies, Rev Theory, Adelitas Way and the Veer Union.

That should give BB fans a chance to get to know the songs. Guitarist Aaron Fink told Noisecreep in mid-September that they -- meaning Fink, frontman Benjamin Burnley, bassist Mark Klepaski and drummer Chad Szeliga -- wanted to wait until the album was released before hitting the road.

"We'd rather let the songs marinate a bit in kids' brains before they come out, so they really want to hear those songs, instead of just playing stuff that goes by that they've never heard before," Fink said. "Also, these days with cell phones, if you play a song it will be on YouTube before the record comes out, which isn't the best strategic move, I think."

'Dear Agony' was produced by David Bendeth, who worked with the band on the second album, 2004's 'We Are Not Alone,' as well as 2006's 'Phobia,' both of which were certified platinum. Breaking Benjamin's first single from 'Dear Agony' is 'I Will Not Bow,' also the feature song in the Bruce Willis sci-fi thriller 'Surrogates.'

"It's a great rock song. It's our heaviest single that we've ever put out," Fink told Noisecreep. "The song wasn't written for the film, however. It's a coincidence, but [singer Benjamin Burnley] says 'fall' a lot in the song, and in the movie the surrogates fall down or they're shut off or something."