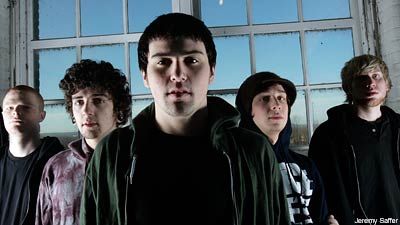 "The song is about misleading people who aren't telling the truth about our society," Born of Osiris guitarist Lee McKinney tells Noisecreep of 'Now Arise.' The song is off the 2009 release 'A Higher Place.'

"After watching documentaries like 'The Esoteric Agenda' and 'Kymatica,' these lyrics were put together displaying [vocalist Ronnie Canizaro's] personal thoughts and opinions on such heavy topics," he said.


Today, Born of Osiris premiere their video online for 'Now Arise' exclusively on Noisecreep. For the band, working on the video was an easy, one-day process without any drama, except for a rouge gas station robbery.

"[There were] no crazy events. But if we had to go to the bathroom, we were in an abandoned building, so we had to go use the animal shelter next door. The neighborhood was definitely in a sketchy part of town. We went to town to go to the gas station, and in just that time, there was a robbery across the street," says McKinney. Luckily no one in the band was hurt.

Video director David Brodsky helped Born of Osiris create their video vision. "It was a pleasure working with David Brodsky," says McKinney. "He really cared a lot about bringing our opinions out in the video. He took every thing we asked for and brought it out perfectly."