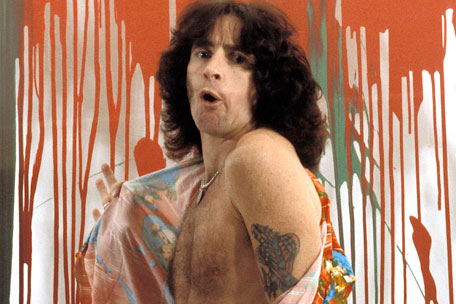 It looks like the proposed Bon Scott biopic is one step closer to becoming a reality.

According to reports, the planned film about the life and tragic death of AC/DC front man Bon Scott has finally been approved for funding by Australian federal development and film-funding organization, Screen Australia.

'Bon Scott,' which will be directed by Eddie Martin and produced by Lizzette Atkins, first made headlines back in 2008, and while details are still scarce, will begin casting shortly, now that it has been greenlit by the Australian government. The director/producer team previously released full-length documentary 'Lionel,' about the life of Aussie boxer Lionel Rose.

Bon Scott tragically died in 1980, choking to death on his own vomit while passed out in a friend's car, after a night of heavy drinking in a London Club. His official cause of death was listed as "acute alcohol poisoning" or "death by misadventure." He was 33.

A documentary about the rock legend was previously released in Australia in 2006, and Melbourne rocker Nick Barker recently starred in a theatrical production about the singer's life.

Buy AC/DC: Let There Be Rock