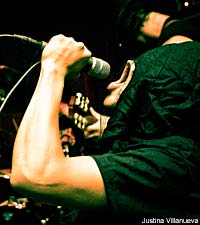 Usually after a 30-city tour, a band's last show is the smelliest. However, when Bloody Panda played the last show of the Summon Tour at Union Pool on Aug. 21, the band was in fresh, clean clothes. It must've felt good for them to be home, because their set was one of the best I've seen from them yet. And, of course, air-conditioned venues when there's August heat make everyone happy.

The six musicians that make up Bloody Panda were in touching distance of each other on the tiny stage, and the venue was packed with friends and fans. Vocalist/visual artist Yoshiko Ohara's singing exploded into hoarse yelling. Meanwhile, Gerry Mak's deep guttural throat vocalizations -- think Attila Csihar of Mayhem and Sunn 0))) -- intertwined with Ohara's, providing for some contrasted droning.

Every member except for Ohara wore black hoods while on stage. It is debatable as to whether or not it makes the group seem any more punishing than their tunes, but it's still a nice visual. Bloody Panda paints spacious landscapes with dissonance similar to Kayo Dot (members Toby Driver and Mia Matsumiya watched the ceremonious band as well). When drummer Lev Weinstein (Krallice) added tribal rhythms, it became an enjoyable head-swinging experience.

Bloody Panda's new album, 'Summon,' has already received many great reviews. It includes a DVD, which the band says is "a 21-minute doomcollage of live moments, natural disaster footage and Butoh." The 60-minute album will be released by Profound Lore on Aug. 25.