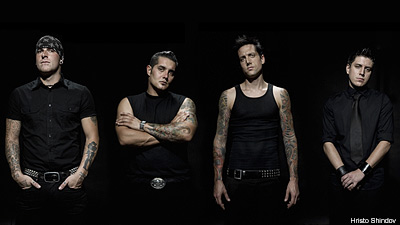 Former Bleed the Dream frontman Brandon Thomas calls his new band, Phantom Communique (pronounced 'commune-ick-ay'), 'rock metal.' On record, that is. Live and in person, he thinks the band is more metal than radio rock, more Lamb of God than Godsmack. And he's anxious for the world to hear what he's been cooking up.

"We have huge catchy rock melodies and rock hooks, and we have some pretty crispy, edgy, gnarly metal riffs," Thomas tells Noisecreep. "Live, I would say we're a metal band. We're way more intense live than we are on the record. I just want to beat the s--- out of the streets with this s---. I think the record's great and we did a great job. If you came to see us live, you'd know the difference. That's all I want to do -- tour for the next two years and just really beat it into people's ears."

The band's debut LP, 'The Wolf and the Sheep,' drops on Feb. 23, and the band will be touring extensively around the album release. It's been a few years since he toured with Bleed the Dream. The band dissolved in 2007, after trying to recover from drummer Scott Gottlieb's death; he'd lost a long bout with leukemia.

"We continued on after that, and it really just took a gnarly toll on the band and we all started to really hate each other, and we were friends as kids and everything," Thomas says. "They made the decision to move on without me, and they did one record with a different singer and broke up. Since then, I've gotten together with them for some shows. The band isn't together, but we're all good friends and maybe one day, we'll end up doing something. We're all focused on what we have going on. We're all trying to make our own paths in life."

Now, with Phantom Communique, Thomas is feeling inspired again, because everyone is in it for the same reason: They all want to make music and tour. In fact, maybe they could head out with Jay-Z. See, we asked Thomas for his top album of 2009, and his answer surprised us.

"It would be a toss up between the Kings of Leon and Jay-Z," he says. "As far as metal goes, I'm really into heavy music. But it's really hard to impress me anymore. There's just so much s--- out there, so I listen to a lot of the Top 40 stuff, just to ... when you've been on tour for three years and seen a thousand bands, you try to reach outside of the norm. But I also listen to Lady Gaga. That Jay-Z record is as good as it gets. I'm an old East Coast hip-hop fan, and that guy just needs to keep going, His new record blew me out of the water."

Download Phantom Communique Songs
Filed Under: bleed the dream, BleedTheDream, Godsmack, jay-z, kings of leon, KingsOfLeon, Lady Gaga, LadyGaga, Lamb of God, LambOfGod, phantom communique, PhantomCommunique
Categories: Interviews
Comments
Leave A Comment
Godsmack Beat Metallica for No. 1 Song on Billboard Mainstream Rock Chart
11 Ways Metal + Pop Really Aren’t That Different
The 50 Best Rock + Metal Songs of 2022
The 50 Best Rock + Metal Albums of 2022
The Highest Charting Rock + Metal Albums of 2022
Artists Answer – What Song Are You the Most Proud of?
Where Did the Wall of Death Come From?
Bands Who Changed Their Names After Releasing at Least One Album
Lamb of God to Lead Inaugural ‘Headbangers Boat’ Metal Cruise in 2023