On Jan. 8, Black Veil Brides will release their highly anticipated third album, a rock opera entitled Wretched and Divine: The Story of the Wild Ones. As well, a film called Legion of the Black is being released in several weeks. It tells the visual story of the concept presented in the album. The film follows "a group of rebels known as "The Wild Ones" as they defend their hearts, minds and bodies against F.E.A.R."

Further proving that early 2013 will be hectic for the Los Angeles-based group, Black Veil Brides will also embark on 'The Church of the Wild Ones North American Tour' from January till March.

Andy, this has time for the band been a long time in the making. How do you feel now that you're on the heels of what seems like the band's biggest release to date?

Excited - the only word is excited, honestly. This my favorite thing I've ever done artistically and I can't wait for people to hear the amount of work that's gone into this. It was not an easy task doing a project on this scale – it's different building this kind of story, a really a tough thing to do, and I've actually been inspired just by watching the rest of the band and everyone else relate to this. Just a huge effort by everyone, all working together.

I remember growing up how everybody hated concept albums, that's at least from my era of growing up. They were usually considered sort of goofy. But then, all of a sudden, you had this resurgence thanks to thing's like Green Day's American Idiot, and so I'm happy people came back around on storyline, concept ideas. As a kid, I was also a fan of Batman, which a lot of people are aware of today. I liked the characters that had no superpowers, but rather with a heightened kind of reality. Those were my kind of super heroes.

The band has had a tumultuous couple of years. How much of that influenced the writing on the new record?

For us, in terms of writing the songs it has to be genuine subject matter, no matter what the concept; I always think that the stories in our songs have to be about things we experience on a daily basis. And that's what our fans relate to. And that's where I come from - being the weird kid that's told my relativity was subject to political or religious ideas. Like our fans, I never wanted to be kept in the shadows, even though there are lots of things designed to keep us down. So I still write from the point of view, too.

Out of curiosity - did you follow the recent presidential election closely?

I did. I honestly was disappointed by the lack of both of the candidates' willingness to really touch the issues. Neither Romney or Obama wanted to be seen talking about abortion or gay marriage or others things people actually vote on. They know that people will just basically vote for their party so why deal with real issues? I'm not a political person, but I was and am fascinated by the immersion that people have to their own sides; the way people get so dug in no matter what.

Your fans are so dedicated. Do they remind of you when you were younger?

If I'm being honest, I didn't have that sort of community. I grew up as a loner, but I set out to create a community with this band. Then they started to breathe life into it and they took it and ran with it. They created this amazing community and it's a really a nice relationship with the band – we help each other. One thing about our fans – they are not in this just for aesthetic value. They are radically affected, I think, by what we do, so we try to make sure all of our messages are perfectly clear. 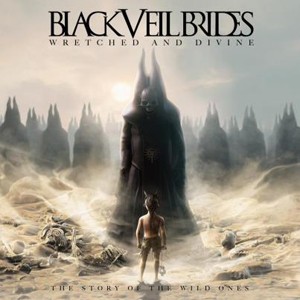 Black Veil Brides' Wretched & Divine: The Story of the Wild Ones will hit stores on Jan. 8 via Lava/Universal Republic and can be pre-ordered at this link.