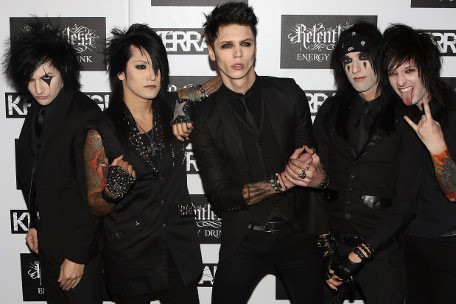 Black Veil Brides have gone on record to say that their third album will be a "punk rock record." That's enough to get us interested. Frontman Andy Biersack said that the band hopes to complete the follow up to Set the World on Fire by the end of August. He also shared that they are working with Goldfinger's John Feldmann. The singer said, "We've got three songs tracked. We've set ourselves a deadline of the end of August to finish it. We've got 20 to 25 songs written and we're narrowing it down now. It's going to be more of a punk rock record than anything we've done before. It's Social Distortion meets Metallica." Wow. That sounds enticing, that's for sure. Biersack also shared that the album has a title, but wouldn't reveal it, saying, "Of course we've got a title. I don't do anything unless I think about it six months in advance. We've got a title, we've got a story. It's a bit of concept record, there's a very serious story behind it. It's full of surprises." Bring it, Brides. [NME]

More drama is developing in the Queensryche camp. The band was slated to play the USANA Amphitheatre in West Valley City, Utah tonight (June 11), but singer Geoff Tate looks to be performing without his mates. He stated that some of the members could not make the gig "for personal reasons," adding that the show will go on. He said, "Although I would have really loved for all of us to play together, it wasn't possible for them. I couldn't miss playing for one of the best rock audiences in the world and opening for one of my all-time favorite bands for anything. Thanks to my fans, and the Scorpions for your continued support and I plan to rock Salt Lake City today at the show." That sounds sort of fishy. We're not sure what's going on, but the other members of the band have a side project called Rising West that may be taking their attention and there have been rumors of internal troubles for the past few weeks. Sounds like a rift is afoot. [Blabbermouth]

Former Stuck Mojo vocalist Bonz has embarked on a new project called Onz, which will hit the road on the Mouth of Mojo tour beginning in August. Bonz's future in music was uncertain for a hot minute, but he's back. The band also features former Primer 55 member Curt Taylor. The band also has a number of friends making guest appearances on their recordings. [Brave Words]

Entertain yourself for a few minutes by watching the lyric video for Gideon's "Still Alive," which appears on Milestone. The album drops July 3, so familiarize yourself now. The band will soon join Demon Hunter and Sleeping Giant on the Scream the Prayer tour! Mosh it up! [YouTube]