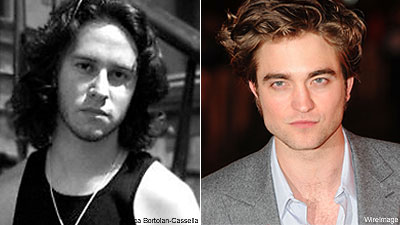 Black Tide bassist Zakk Sandler is so not on Team Edward. The bassist issued a tirade about rumors that 'Twilight' heartthrob Robert Pattinson -- who makes 16-year-old girls swoon as pasty-faced, pouty-lipped, Bella-loving vampire Edward Cullen -- will portray Kurt Cobain in a film about the late singer's life and last days in Nirvana. One thing is for sure: Sandler isn't buying a ticket when this film, slated for 2011 release, hits theaters. And he says true Cobainians shouldn't, either.

"I will personally be boycotting this movie as if it were a re-imagining of WWII, where Hitler wins," Sandler said. Sure, it's an inflammatory statement, but he isn't just bitching for the sake of bitching. He has well-reasoned arguments against Pattinson playing the alt-rock/grunge hero and suggests better choices for the role.

"Hollywood has always been the partner of music, and they go hand in hand just about as perfect as spaghetti and meatballs," Sandler said. "For the most part, studios pick actors or actresses who look, sound and can be the perfect representation of the person they are portraying on the silver screen. They become them and people always associate them with the famed person they play.

"Gary Oldman playing Sid Vicious, Val Kilmer playing Jim Morrison, even Johnny Depp playing the great Hunter S. Thompson [were] all suitable choices and almost perfect to some aspect. When you see them, you can't even imagine anybody else becoming these icons. Icon is the only word to describe the next rock star that Hollywood is about to make a film about. He was the '90s martyr to fame and fortune. I'm talking about the late Kurt Cobain."

Sandler is mortified at Pattinson playing the role, stopping short of calling it a sacrilege, saying, "The thought of some teen heartthrob coming along and ruining the image of a rock 'n' roll icon is horrifying to say the least. It's some major studio looking to make a buck of the hot minute actor's success and get all of the teens that follow 'Twilight' to buy into seeing him destroy the image we all grew to love of Kurt Cobain."

Suggestions for actors better suited for the role of Cobain? Topping his list is 30 Seconds to Mars' singer and 'My So-Called Life' former heartthrob, Jared Leto, who once bulked up to play John Lennon's assassin, Mark David Chapman, in the little-seen Lindsay Lohan starrer, 'Chapter 27.' Sandler said, 'The guy is already a musician who has proved himself to be a great actor and he digs deep into the roles he is going to play and lives the lifestyle required to understand who he needs to become. Be it putting on 60 pounds to play Mark David Chapman or becoming friends with heroin junkies to understand the lifestyle of a fiend for his role in 'Requiem for a Dream.'" All valid points, yes.

Sandler also suggests Emile Hirsch, who played the unsympathetic and polarizing vagabond Christopher McCandless in 'Into the Wild' in a sincere, sympathetic way, as a perfect candidate to step into Cobain's One-Star Converse sneaks. "While he is young and still at the start of his career, he has proven himself to be a terrific actor and is more than perfect for playing Kurt Cobain. Why can't Hollywood search for an unknown or an up-and-comer who is truly passionate about the role? Hell, I would do it if asked ... I hope someone out there is sitting behind a desk asking these same questions and wondering if this is even the right move."

The "sheer thought of some pussy boy heart throb talking over the role of a guy who has influenced an entire generation of rock 'n' roll without even considering how fans would feel" is what incenses Sandler so much. "This is pop culture at its worst and they may as well have Scarlett Johansson playing Courtney," he said. "Oh wait, that's what they are doing. For f---'s sake! Who the hell is behind this? It's like Courtney Love is somewhere being the puppet master behind this monstrosity. Oh yeah, she is behind this. She is calling the shots, like some evil dictator looking to make a buck off the tired, the hungry and the poor."

So what can we as a community do to stop this nonsense? Simple. Like Alice in Chains say, vote with your dollar by keeping it in your pocket when the movie lands at multiplexes. Sandler said, "I hope there is a miracle and fans will boycott the making of this terrible mistake. Fans of rock 'n' roll and Kurt can't allow this to go on any further. Didn't Kurt hate the idea of being as famous as he was? Wasn't he the people's rock star? What would Kurt Cobain think of all this?"

Wherever he is, he's probably rolling his eyes at this casting choice. Black Tide's 'Light From Above' is out now.