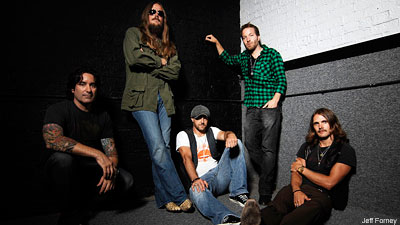 From Buckcherry to Black Robot. That's the story for guitarists Jonathan "JB" Brightman and Yogi Lonich. Way back in 2002, while on tour with Buckcherry, JB and Yogi met singer Huck Johns in Detroit. Six years later, Black Robot was an official act, working on a self-titled, self-financed debut. Now, the AC/DC inspired band is ready to take their show on the road. Oh, and there might be a fire breathing robot along for the ride, too.

"With this music, and these songs, we've been rehearsing for almost a year already...and the band sounds unbelievable and we're excited to do our first couple of shows," gushes Brightman. "We've worked really hard and it's about to set something off into motion."

It wasn't always this easy for fledging rock acts to gain an audience. Buckcherry is a good example. "When I first met Josh [Todd] and Keith [Nelson] and we put together Buckcherry, we all commonly bonded because we all loved the 80s sounding bands. AC/DC and sometimes the old heavy metal...and we didn't predict anything would happen to us. In fact, we were pretty positive nothing was going to happen...so we should do it all independently. So we had a whole game plan of how we were going to sell vinyl records and chip away a little bit of a living – this was 1995 – and I remember people laughing at us while we were playing. They. Were. Laughing. But slowly people started coming back. It went from a guilty pleasure to being embraced. We literally had to win each battle, gig by gig."

While Black Robot remains a largely untested baby band, the members draw from decades of playing experience. JB is also a self-professed dreamer. "We hope it gets to the point where we don't have to write 'Black Robot' on our albums. We just show an image of the robot and people will know. It also gives us an opportunity for merchandising and marketing and it's a lot of fun to have a giant black robot. It's just kind of us dreaming of what it would be like to have an old fashioned stage show. I love that theatrical part of music."