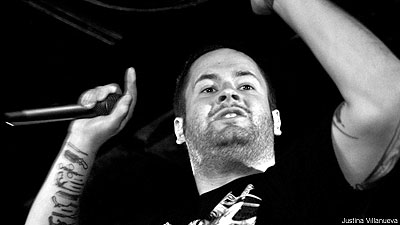 "You guys are nuts man. What the f---!" Black Dahlia Murder frontman Trevor Strnad said on March 20 when the death metallers played Santos Party House in New York City. Strnad did not exaggerate. This Noisecreep writer found herself saying the same exact two sentences a couple minutes before. I saw several people lose shoes and shirts in the monstrous pit that overtook the main floor of the venue. There were also bleeding noses and stage divers.

Black Dahlia Murder -- who brought along Obscura, Augury and Hatesphere for the short, small venue tour -- played just an hour or so away in the beginning of November. And with a couple other metal shows happening that same spring day, Saturday's turn out was way better than I anticipated. At a time when everyone is strapped for cash, it's comforting to know that death metal shows can still sell out clubs.

"This isn't a Scorpions concert," guitarist Brian Eschbach warned the tireless crowd when the band only had two songs left to play. "We're not going to play for hours. If you guys want a circle pit, start one now!" At the guitarist's suggestion, a raging circle pit emerged in the center of the club. They hadn't begun playing a single note for the next song yet, but Eschbach convinced their fans that time was running out.

Be sure to give 'Deflorate' a listen. It's out on Metal Blade Records now.