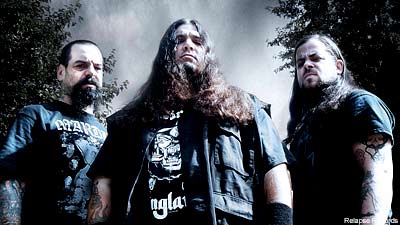 New York black metal band Black Anvil may have been influenced by progenitors of the genre such as Celtic Frost, Bathory and Sodom, but for some reason they've reached out to one of the aesthetic enemies of their forefathers to produce their second album, 'Triumvirate.'

'Triumvirate,' which will come out this summer, was recorded at Twisted Sister guitarist Mark 'The Animal' Mendoza's studio in Long Island, N.Y. by 'General' George Fullan (Rolling Stones, Dream Theater). Tracks include 'The Evil of All Roots,' 'What Is Life If Not Now!' 'Angels to Dust,' 'Ultimate Reality,' 'With Transparent Blood' and 'Dead and Left.' While the album features no leads, there's no shortage of metallic mayhem.

Black Anvil, which features three ex-members of Kill Your Idols, recently shared the stage with Norway legends Immortal and will be playing three shows with Municipal Waste and Toxic Holocaust later this month. In early June, the band will head out for three shows with Eyehategod, Brutal Truth, Nachtmystium and Tombs.

Additionally, 13-minute video of the band in the studio has been released.