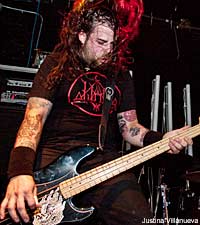 "Right now, we are writing a new record and take time away from that occasionally for live assaults," Black Anvil bassist and vocalist 'P' told Noisecreep. "You can expect to get 110 percent from us. This is being created from everything inside of us. It's the next natural step for us and it will be as aggressive as it can be. That's the ultimate reality."

As aggressive can be is just how headbanger's like it. And Black Anvil, which features ex-members of Kill Your Idols, clearly 'get' it. P -- who also told Noisecreep that he hates cilantro -- isn't going to categorize the music, though. That's up to the listener and his or her discerning ear.

"We're not ones to sell our band to people. We've gotten to this point by following our own path," P said starkly. While the New York blackened metal band is recording the new album, their brand new label, Relapse Records, just re-issued their debut, 'Time Insults the Mind,' on Sept. 1. You can never have too much Black Anvil in your life, and Relapse is re-introducing the album to the marketplace via the re-issue.

The band shook the very foundation of Fontana's in downtown New York Sept. 3 with a record release party. With their dirt-under-the-fingernails metal, it's hard to believe Black Anvil features ex-members of Kill Your Idols! That said, Black Anvil are giving Nachtmystium a run for their money as a true, blackened, American metal band!