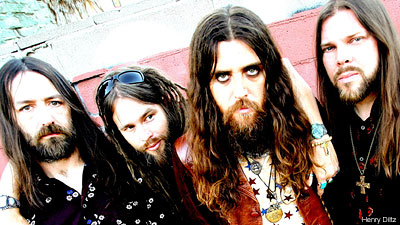 "When you combine strings and rock n' roll, it's always a touchy subject for certain folk. You know, you look at Black Sabbath - they didn't have strings on their albums. They had minimal keyboards in general. The sounds in Bigelf are much more diverse," Bigelf front man and creator Damon Fox admits to Noisecreep. The Los Angeles based band takes pride in their unique sound - and has no problem admitting they worship the giants of rock.

Often mistaken for a new band, Bigelf actually have four albums and a few EPs under their collective belts. 'Cheat the Gallows' hit stores last summer and enjoyed much critical acclaim. Often dubbed a psychedelic/progressive band - Bigelf attempt to defy labels. "You can probably label us ten different things with the exception of country," says Fox. "Being in a band, you are what you are... I have started to realize most bands don't have as many sounds as we do. Music used to be like that. Bands in the late 60s and 70s were either able – or brave enough – to be five different bands in one album."

It's that diverse sound that has kept Bigelf going since the 90s. "We've been the same since we started the band. It's just been the atmosphere around us changing," admits Fox. Bigelf perform extensive stage shows. In fact, Damon spends most of his time wedged between an organ and piano. In clubs, this can make concerts interesting - and cramped. The band hopes to use this stage presence to push them forward. "Our sound is also a little esoteric, meaning we could fit in with The Raconteurs or The Mars Volta. We really want to open for Black Sabbath and Pink Floyd!"

Bigelf will tour with Dream Theater as part of the Progressive Nation tour this fall.