Biffy Clyro, who are huge in their native U.K., are back with their latest album, Opposites. It could very well be the album that helps the band break through in the U.S., where they've been a cult favorite so far.

Noisecreep spoke to bassist James Johnston about Biffy Clyro's status as one of rock's best-kept secrets, the larger story behind Opposites, which is a double concept album, and VW travel.

Do you ever feel disappointed by the U.S. market's reaction to the band? Biffy are like an edgier Foo Fighters...

It's not quite so romantic. It's the birthplace of so many great bands that we love and we'd love to do well in America. It's not some sort of... you know, we are not searching for the gold. We enjoy playing shows whether it's a small room or a big room. We are a realist band... It's not the overriding thing.

Maybe we're a well-kept secret. Maybe the Foo Fighters comparison isn't too far off the mark. It's always been great fun. Bands are only as good as their last show. Things can be over as quickly as they started.

Can you share a writing or recording story about a song on Opposites? It doesn't have to be "Black Chandelier."

'Spanish Radio' has a Spanish mariachi band, which is so far removed from what we've done before. [Singer] Simon [Neil] has great ideas about the trumpets. When it came time to record, we had a mariachi band that never performed in that time signature for it. We've start to play it live now, and it feels so different and it's exciting to try new things on our sixth record. It sounds like a small thing but it's a strange thing.

Do you have any non-musical skills or hobbies?

One of my small hobbies is concerning Volkswagen vans, like a VW camper van. They are popular on the West Coast. I have a little VW camper van that I like to go on trips in. When I have time. That's what I do in my spare time. I just go around Scotland. It's a small country, but it is beautiful. I never go too far since I am worried it'll break down. It's about as old as I am so I don't know how long it has left.

The album is a double release, with 20 songs. Can you summarize the larger, overarching concept?

The first disc is The Sand at the Core of Our Bones, which looks at things in your past. Things you can't change, and the second disc is The Land at the End of Our Toes,'which is about looking forward. You want to change things in life for the better. It has a much more positive outlook. 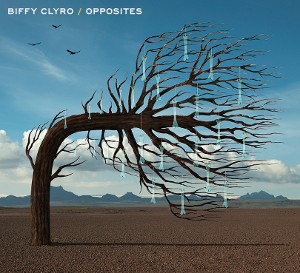