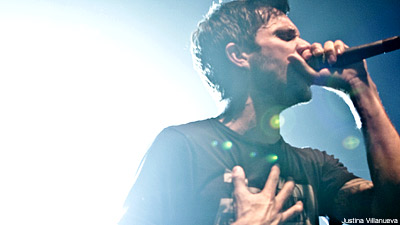 "BTBAM. BTBAM. BTBAM" the audience shouted as Between The Buried and Me walked out onto the Irving Plaza stage on Jan. 30.

"We have an old friend here tonight, so we're going to play 'More of Myself to Kill,'" frontman Tommy Rogers said. It's been a long time since this writer has seen Between the Buried and Me play anything from the pre-'Alaska' era. And by a long time, I mean since 2005, when they played CBGB's with the Red Chord and the Acaia Strain.

Chuck Johnson, the band's all-purpose roadie and friend, did guest vocals on the last track of 'The Great Misdirect.' So when the band played 'Swim to the Moon,' they had Johnson come to the stage and do some scream work. But in order to get back to the light board, Johnson had to crowd surf the entire Irving Plaza crowd. This wasn't too hard, considering there were a lot of helping hands at the sold out show.

"I have to say this tour's not s--- without the bands that played before us," Rogers said before playing the last song of the night.

And just as the girls were jumping up and down screaming that they were going to play 'White Walls' as their encore, Between the Buried and Me did. Everyone who thought it was time to get on the coat check line must have run back upstairs, because the place filled up again.

After the band plays their last U.S. show in their home state North Carolina, they will be visiting the rest of the world by playing shows in Europe, Australia, Japan and Hawaii. 'The Great Misdirect' -- which debuted on the Billboard Top 200 at 36 -- is available now via Victory Records.